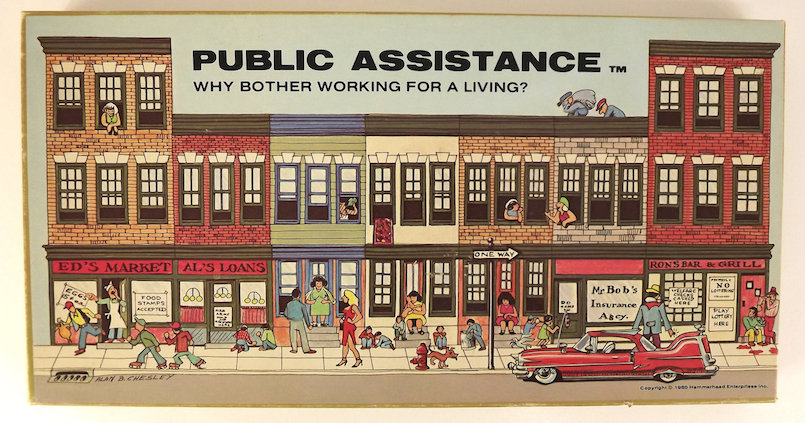 22 Board Games That Were Totally Offensive When They Came Out

These are some of the most offensive, racist, sexist and obscene board games ever made, and people lost their minds over them when they came out. Today, some of these might still be inappropriate board games, but many of them are now perfectly acceptable and some of the most fun you can have when planning a board game night (without the kids).


This is a basic memory and match game. All the cards are turned face down, you turn over one card at a time and then try to find its match through memory. Except this is done with women’s breasts, and you’re matching the right one to the left one.
This is like offensive light. Yes, it is demeaning toward women, but it isn’t nearly as bad as some games on this list.


Think of this as The Game of Life, but instead of different careers you have the “working person’s rut” and “able-bodied welfare recipient’s promenade.” Your goal is to have the most money at the end of the game, aided or impeded by cards such as “working person’s burden” or “welfare benefit.” Obviously, the game is meant to be an indictment of the American welfare system, but it comes off as racist and whiney.


So, the point of this game is literally to spend some, ahem, private time with other real-life players. You get tokens good for 2, 3 or 5 minutes of alone time with other, randomly selected players. When each player gets three tokens the pairs split up, and the game is over when each player has gotten hanky panky time with two other participants.


This game is tough, because the intentions behind it were good. Players were meant to empathize and gain a better understanding of how people of another ethnicity live. Unfortunately, this just ended up being a cliché ridden piece of crap game, sort of like a racist Monopoly.


The 1960s were all about becoming a career girl, and that’s the gist of this whole game. If by career girl you mean becoming a nurse, secretary, teacher, model, dancer or actress, and definitely not a lawyer, doctor or politician.


If you’ve ever had a hankering for being a drug kingpin selling mysterious “kilos” (they don’t say kilos of what, but we think it’s pretty obvious). This is your typical roll-and-move game, where you cross the border and buy “kilos” from Jose, Eduardo, and other men with similar names, then crossing back to sell said “kilos” in various American cities. Just don’t get caught by the border control agents & other U.S. govt. officials!


We have nothing to say. If you can’t see what’s wrong with this game then you’re a lost cause. You’re supposed to shoot the little boys…


Updated, now with one more target, and 20% more racism.


Yes, this is a Nazi game, kind’a like Monopoly and kind’a like Halma. You move around the board, collect Jews and then kick them out. There’s some racist imagery in the game as well.


Again, no explanation needed, me thinks.


So, basically you run around collecting other passengers to save, flee the Titanic and survive by stopping at assorted islands for food and water. Overlooking the obvious implausibility of finding well-stocked islands in the North Atlantic, this game is a bit insensitive and cavalier when it comes to the tragedy.


So, there is one narc and up to 8 dealers, with dealers trying to sell a kilo of cannabis before getting busted. The first to sell one kilo wins, or if the narc can bust all the dealers first s/he wins. Some of the characters are also stereotypical caricatures of minorities.


The Germans did it again. You’re a German pilot in WWII and you flick chips onto a map of England to represent bombing the country, trying to land on targeted cities.
More than anything this just sounds boring as hell.


Pimp hoes, buy properties, build projects and crackhouses. Oh, and pay back loan sharks or you’ll end up in da emergency room. Yes, there is stereotypical racism galore, though the game is supposed to be moderately fun.


Again, you should be able to figure out why this is offensive.


Forget being the top hat, in this take on Monopoly you can choose to play as a jeep, teddy bear, blow drier, leather cap, handcuffs or a stiletto heel. Don’t buy hotels or houses, instead go for bathhouses and clubs. All the various properties are gay themed (Castro Street & Fire Island), and then there are Camp Cards. Meant to appropriate Monopoly for the gay & lesbian crowd, it ends up just being a bunch of LGBT hackneyed ideas.
Our favorite bit though is that the game manufacturers included a $3 bill to the game. It’s a queer little quirk that’s so perfectly tongue-in-cheek.


It’s not racist, sexist, homophobic or anything else, but at the time the game’s box was considered too grotesque for the public. Goodness, how times have changed.


Ladies, you can be whatever you want, so long as it’s one of the following:


The premise of the roll-a-dice-and-move board game is simple enough. You and up to four people are riding the NYC subway from Brooklyn to the Bronx (not something I’d ever recommend), and along the way you’re trying to survive punks and thugs. There are some stereotypical clichés about people of certain colors, however, and that’s why this game gets on the list. Oh, and it glorifies killing. In 1982 that was a bigger deal than it is today.