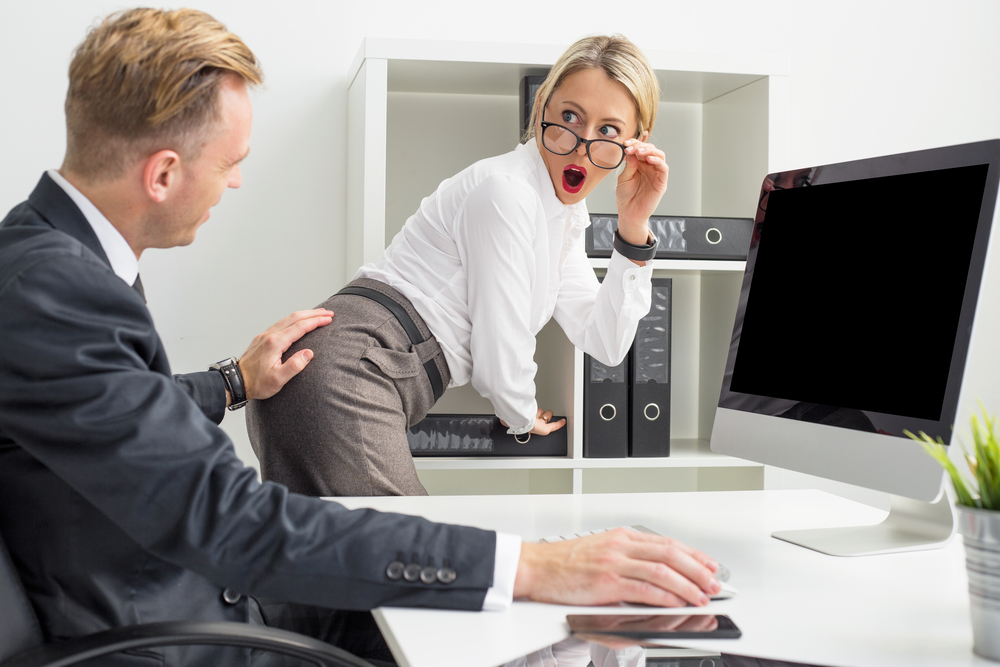 3 awkward work situations and how to deal with each

1. Your hot boss is hitting on you at work.

This situation is awkward because of the no sexual harassment rules, but let’s face it: it might not be altogether unpleasant. Nevertheless, it does make for tension at work that you could do without, especially since you’re trying to make a good impression on the job.
Courtney, an intern at a major aviation supplier in Florida, had this happen during her first three months on the job:
“At first, I was pretty nonchalant about it. This was my first real job, and I guess I thought maybe this was pretty common at big companies. He was really attractive, so I kind of flirted back a little. Then my coworkers started noticing it and treating me differently, and I realized I was being typecast, which wasn’t okay with me. I ended up confronting the guy about it, and he got really angry with me and denied everything. Then his attitude toward me went in the opposite direction. He made things more difficult for me while I was interning, but I stuck with it. I finally gained back my coworkers’ respect, and I just recently got offered a permanent position in a different department.”
Bottom line: Sexual harassment in the workplace is not cool, no matter how great-looking the guy is. It can damage your reputation and grind your career to a halt. Don’t tolerate it, and don’t engage in it. Although Courtney’s situation turned out well, it’s best to have a private conversation with an HR manager if you’re experiencing sexual harassment.

2. You got the promotion over your best friend.

Office friendships can be great, and some people might even say they’re necessary. But when one friend gets promoted over the other, the atmosphere can get chilly very fast. Here’s what happened to one person.
“My best friend from college and I both got hired at the same telecommunications firm. We were more than psyched, and for the most part, it’s been really fun having my best friend at work with me all day. But since I got this promotion and she (obviously) didn’t, it’s like she’s turned into a whole new person. Now, it’s like she’s on this campaign to turn all the employees—the same people I’ve been promoted to manage—against me. It sucks. I’ve lost my best friend, plus now it looks like I’m going to fail at being a manager.”
Bottom Line: Your best friend isn’t being a good friend. It’s important to realize it’s her issue, not yours. You got the promotion because you deserved it, and she didn’t. Her actions after the fact validate that she mightn’t have made a good manager, because her people skills aren’t the best, are they? You can attempt to solve this by taking her out one night and having a chat like in the old days. There’s no need to mention the “campaign.” She already knows about it. Just say how it’s too bad there was only one spot open, and how you’re sure next time it will be her turn to get promoted. Remind her why she liked you in the first place. Extend the olive branch and make it clear you don’t think you’re better than her. If she changes her attitude, that’s awesome and you can continue being her friend. If she doesn’t, you’ll need to deal with her in the same way you’d handle any insubordinate employee in your new role as manager. That’s too bad, but she created the situation, not you.

3. Your Co-Worker is Stealing From the Company

It sucks to discover information about somebody that could land them in trouble if people found out, or you in trouble if they find out you told. Just ask Edward Snowden what that feels like. Here’s a case that happened recently to someone I know.
“After work one night, my co-worker offered to give me a lift home so I wouldn’t have to wait for my boyfriend to pick me up. As I was getting into her car, I noticed some stuff on the back seat that had spilled out of her tote bag. I recognized it as some stuff from the office. There were binders with the company logo, mouse pads, pens—it was like she raided the supply closet. Basically, there was so much stuff back there she could have opened an office inside her car! I can’t decide if I should say something to my boss.”
Bottom Line: You don’t know the reason why your co-worker had all that stuff in her car. Yes, from all appearances, it’s likely she stole it, but you can’t convict a person on circumstantial evidence, and anyway, you’re not the judge. The best thing is to keep quiet on this. If someone asks you in the future if you’ve seen anything related to office theft, you can speak up then if you feel comfortable. Other than that, just stay mum.
Whatever awkward office situation you find yourself in, take a minute to really think about what to do, and what the consequences of your actions might be. Whatever you do, try not to have a kneejerk reaction that you haven’t thought through. If you approach the situation logically, you’ll be able to figure it out after all.