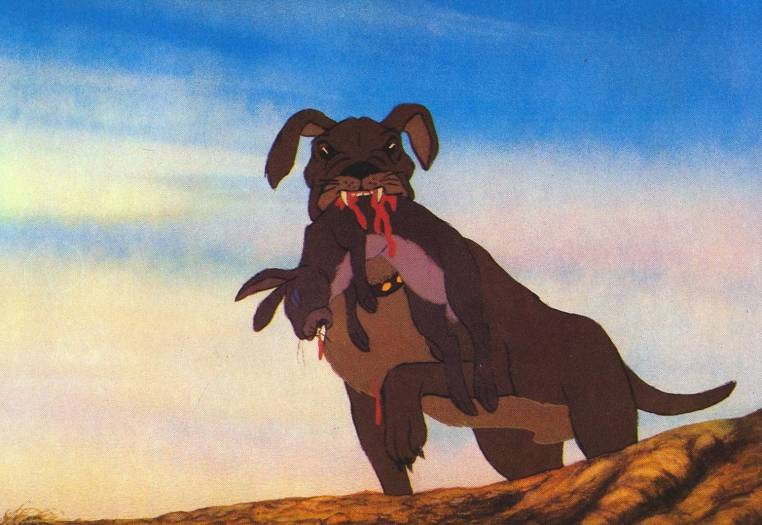 If you grew up in the 90’s and early 2000’s like I did, there’s probably some things you remember fondly: Pokemon Cards, Nickelodeon, Gameboy Colors.

There’s also things you remember less fondly: Dial-up internet, 9/11, Boybands, and of course, the fact that everyone making kids’ movies seemed determined to scare the hell out of you at every opportunity.

Kids from the 90’s were kind of at the tail end of the trend of children’s movies that were deliberately frightening, and we seem to have gotten more than our fair share of horror.

If you were a kid between 1990-2003, here are some movies you might remember from your childhood..and your lingering nightmares.

Anastasia is the story of the last of the Romanov dynasty, Anastasia, trying to reunite with her grandmother after the rest of her family is brutally murdered in the Russian Revolution. It is generally recognized as being a pretty good animated film. It was even nominated for two oscars. Most of us remember it for being absolutely terrifying. Mostly because of this guy:

That’s Grigori Rasputin, and in real life, he was kind of a sex-crazed mystic who was a constant source of embarrassment to the Romanov Tsars, but they couldn’t get rid of him since he seems to have had some strange ability to cure their son’s hemophilia. In the movie, he’s more of a demonic sorcerer who is constantly trying to kill the main character. He also has a habit of detaching his eyeballs because he’s a zombie. Yeah, there was a lot of material here to fertilize adolescent nightmares.

Conceived of by Don Bluth, who is also responsible for a later entry on this list, All Dogs Go To Heaven starts off with a dog being murdered by another dog, (Yikes) and then forsaking his place and heaven to protect a little girl who has been captured by a mafia-style canine gambling ring operator. Yeah, doesn’t have to make a lot of sense to be terrifying. You probably lost a fair amount of sleep over this sequence here where Charlie, the main character dreams of being sent to Dog-hell.

Yeah, imagine having that in your head when your first dog died and you’ll understand a lot about this  generation. 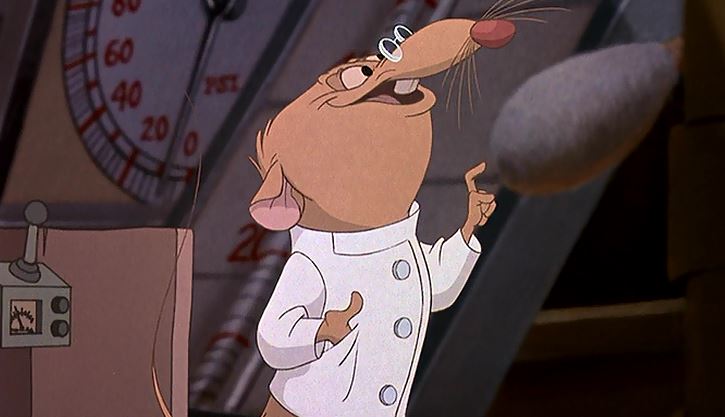 The Rescuers Down Under was the story of an Australian poacher trying to murder a young boy and his animal friends after they lead him to a rare eagle he can kill and sell. Of all the movies on this list, it scared me the most. I feel like I had nightmares about this movie for weeks after I saw it. Mostly because of this:

It’s interesting to watch that again after 15-20 years because it feels a lot different than it did when I was a child. I remember it being absolutely terrifying and viscerally scary in that unique way that only crude, unnecessary medical procedures can be. Now it doesn’t seem quite so bad, though still disturbing. I’m still terrified of needles though and I attribute it to this scene here where they prepare to fire some from a shotgun into a bird’s ass.

The Brave Little Toaster is a movie about some anthropomorphic kitchen appliances who go on a quest to find their owner after he sells his house. Sure, no problems there. Until this happens:

If you’re wondering what you can put in a movie for children without permanently warping their fragile little minds, you can pretty much stop as soon as you get to the word clown.

“What is that? Why does that exist?!” is something you might be asking yourself right now if you never saw Watership Down (in which case I envy you). Watership Down is an adaptation of a classic book about environmentalism as told by talking rabbits. The movie from 1978 is a hideous trip down a tunnel of violence and nightmares.

Basically, the premise is that a rabbit has a prophetic dream where he and is friends are all murdered by human developers, which then proceeds to happen. He then goes looking for a new warren and finds one run by a brutal slave driving rabbit who keeps a harem of female rabbits. Again, lots of parents showed their kids this movie, mostly because they had never watched it themselves but figured, “Hey rabbits. Kids like Rabbits.”

Another film by Don Bluth, A Troll In Central Park is about a troll with the ability to bring plants to life with his horrifying, misshapen green thumb. He is then targeted by the evil troll queen who wants to kill him because trolls are supposed to be evil or something. To be honest the way this was drawn frightened me so much I never really watched it. Apparently no one else did either since it only grossed 0.3% of its budget.

Yeah, that’s a giant cloud rhino coming to eat a small child. If you saw this movie, there’s no way you weren’t terrified when you that thing materialized in the clouds. James and the Giant Peach was the adaptation of a Roald Dahl book, which often toe the line between being great and being terrifying. This one was a little closer to the latter than the former.

Labyrinth was a 1986 movie directed by Jim Henson and starring David Bowie, which makes it sound awesome, which it was, but it was also pretty disturbing, especially as a kid.

David Bowie plays a goblin king with some really tight pants who kidnaps a little girl’s half-brother, hoping to turn him into a goblin if she fails to solve his giant maze.

The movie was full of some frightening puppetry created by the guy behind the Muppets, and there was the ever-present sense of dread you got as a child watching the movie and relating to a character trying to save a the little brother she had gotten kidnapped. As a viewer, you were like “my mom would kill me” if I didn’t get the baby back.

Peter Jackson’s version wasn’t the first time the Hobbit came to the big screen. There was also this nightmare-inducing incarnation:

Those are trolls who are planning to eat Bilbo and his Dwarf companions. Imagine watching that scene as a six-year-old and then having to sleep that night. Then imagine this also happened:

Those are orcs, who also want to eat Bilbo. And finally, of course, there’s Gollum, who wouldn’t mind having a nipple at the scraps.

Perhaps the terrifying masterpiece of that lunatic Don Bluth, The Secret of Nimh is about a group of rats who have gained sentience after being experimented on at the National Institue of Mental Health or NIHM. The main character is a mouse who needs to get her husband some help so he doesn’t die. This requires going to talk to this terrifying owl.

So, clearly Don Bluth was determined to do everything he could to scare a generation of children with horrifying cartoons.

So what do you guys think, are there any other movies you remember from your childhood that you should never have been allowed to watch? Let us know in the comments.