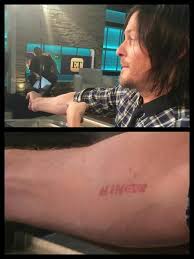 Norman Reedus Tattoos and Other Facts

Daryl Dixon who Norman Reedus plays in The Walking Dead was never a part of the series but surprisingly, he has become one of the lead stars of the show. There are a lot of fans who even consider him as their favorite character because of his various abilities. There are a lot of fans who have threatened that they will no longer watch the show if his character is killed off. Fans notice everything so they analyze all things including Norman Reedus tattoos.

If you would like to know more about Norman Reedus but you do not know where to start, you are in luck. You can get to know various details about him right now.

You have already heard of how celebrities were approached in malls, parties, and events and they were told that they can become actors and actresses on television. This is considered normal but for Norman Reedus, he was discovered when he probably did not think he would be discovered. He was drunk and was shouting while at a party. He was approached afterwards and was asked if he wanted to take part in a play. It was an unlikely situation but it did work out for Norman.

Unlike other people who would get tattoos just for fun, Norman Reedus tattoos are very personal. He makes sure that each one has an important meaning. He has a lot of tattoos but the one that people may know about is the name Mingus placed on his right forearm. This is the name of his son.

Fans can make a person’s career but there are times when they can be a bit too much. Norman has mentioned that he has received a breast implant from a fan and because he is also unconventional, he has decided that he would like to collect them. Fans of Norman Reedus, you should all send your breast implants now! He was also bitten by a Walker Stalker before. He did not say anything at the event but of course, he does not want to be bitten, not on the show and not in real life.

He first auditioned for the role of Merle Dixon but perhaps the producers felt that he was not right for the role. His audition was good though so they created a character that is not part of the series that only he can play. This is definitely interesting aside from the Norman Reedus tattoos and the fact that he was bitten by a fan. There are no videos that have come out that will show how he auditioned for the role but knowing how he was discovered, he may have done something similar to that effect. It would have been cool to see especially if Norman Reedus tattoos were prominent.

It is not evident that he has a titanium eye socket but he has received this when he had an accident that made him crash through the windshield. The left side of his face had to be repaired and the titanium eye socket is one of the things that were placed there. This is truly unique because where else can you find an actor with the same feature?

When you first saw him on The Walking Dead, did you wonder why he looked so familiar? This is because he has appeared in different music videos prior to getting the role. The most recent music video he has been on is Judas by Lady Gaga so if you have not seen that music video yet, you should take a look at it. If you are a fan, it may be one of those videos that you will watch again and again.

He knows that he would like to put his heart and soul into the role that he plays and this explains why he has lived in the woods while filming the show. Prior to having the role in The Walking Dead, he did not know how to handle a crossbow and he also did not know how to ride a horse. The fact that he was able to do those things effortlessly makes him a great addition to the show.

There are so many things that are interesting about Norman aside from the Norman Reedus tattoos. Do you think you will still watch the show if his character is written off?