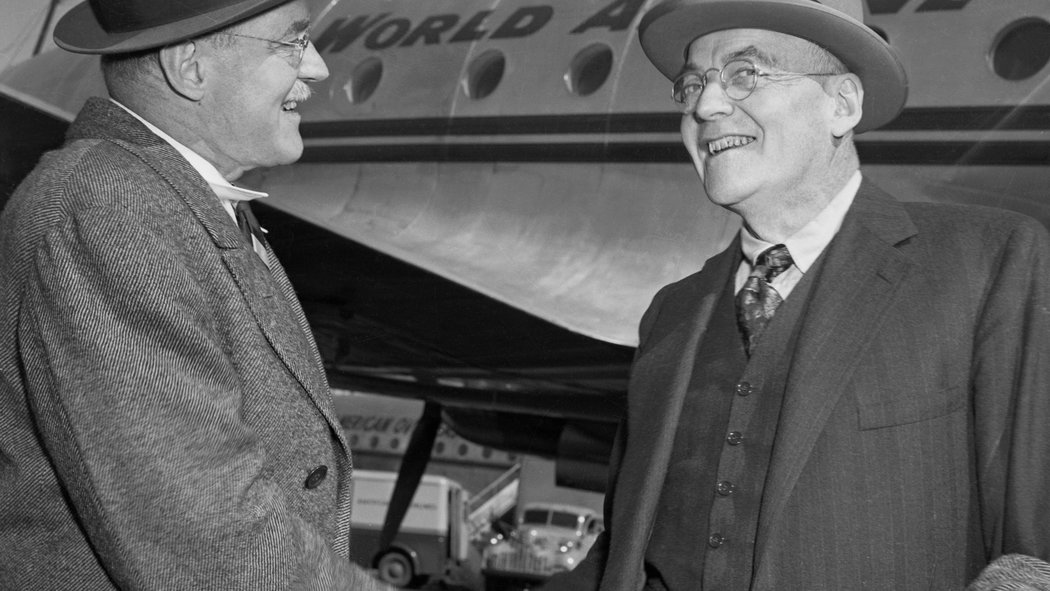 The Dulles Brothers Changed The 20th Century, But Have You Heard Of Them?

The American 20th century saw change on an unprecedented level: two World Wars, the Great Depression, the institution of the Federal Reserve, the rise of the CIA, the Cold War, the Kennedy assassination—the list goes on and on. We are still dealing with the products of events from the 20th century today—and it is likely we will continue to do so for many years to come.

Who am I talking about, you ask? The Dulles brothers, John Foster Dulles and Allen Dulles, that’s who.

But before we get into the nitty, gritty stuff, let’s set the scene. The Dulles brothers were shaped by the same forces that shaped this country and when we understand one set of these forces, we ultimately understand the other.

Now, we dig a little deeper…

The First World War was at an end. The first truly global conflict that had taken the lives of over 17 million people was finally over. Germany, the major aggressor in the conflict, was broken down and weak. The pressing issue was now to decide how to deal with Germany. The costs of World War I were heavy and no Western country was eager to have to pay for their war debt.

Even the great economist, John Maynard Keynes, calculated that it would take Germany until at least 1988, over 70 years from the end of WWI, to pay back the decided amount. This eventual agreement to pay back such a tremendous amount of money would later be used as fuel to the fire of National Socialism (Nazism), and Adolf Hitler himself would talk about the great unfairness of such a requested sum.

Now, what does the Treaty of Versailles have to do with our two brothers, John Foster Dulles and Allen Dulles? They helped draft the treaty. As fledgling lawyers of the immensely powerful law firm, Sullivan & Cromwell, the Dulles brothers were an integral part of the process that both milked a weak Germany of the little resources it had left and led to the start of the even larger conflict of WWII.

A few years after the end of the First Great War, the Union Banking Corporation was founded in New York City, New York. Its board members included Prescott Bush, German steel magnate Fritz Thyssen, and the son of railroad tycoon E.H. Harriman, Averill.

This bank was used to hold some of the money that would eventually help the German economy recover during the 1930’s. Still operating as lawyers, the Dulles brothers represented the bank for almost two decades. This relationship ended in 1942, in the midst of World War II, once the UBC and its holdings were seized by the United States government under the Trading With The Enemy Act.

The funds that travelled through the Wall Street bank were considered earned from business and trade that aided the nation of Germany during a time of war and. In franker terms, they were treasonous. Although the bank was seized through a declaration of aiding the enemy, no serious criminal charges were ever levied against the board of directors.

While the Dulles brothers did not deal in day to day operations inside the UBC, they did know and defend the actions of the bank that verifiably aided Adolf Hitler’s Nazi movement in times of war. Allen Dulles would close their firm’s dealings in Berlin by 1935, against his brother’s wishes, but their support and representation of UBC would outlast the war.

Not long after the end of WWII, conflicts around the world were igniting that would pit the two remaining world superpowers, the United States and the Soviet Union, against each other in emerging nations in South America and the Middle East.

After a democratic election of Dr. Mohammad Mossadegh and his administration’s successful nationalization of Iran’s oil reserves, a secret operation was planned in the newly formed CIA, which, conveniently, was headed by the younger Dulles brother. In a seriously dark and dangerous move, the CIA planned to bribe Iranian politicians, falsely associate supporters of Mossadegh as violent and disrespectful of the country’s past, and eventually helped place the former prime minister into political exile. This plan was given the name “Operation Ajax” and was conceived with serious cooperation from the Eisenhower administration.

Although touted in the beginning as a good move, the coup d’etat has been historically labeled one of the worst foreign policy decisions in recent memory. While profiting the West in the beginning, the distrust that grew from the situation has bred resentment and anger for the U.S. in entire generations of Iranians. The eventual Iranian revolution of 1979 is seen as a direct product of Operation Ajax, and shockwaves from the event still create massive headaches for the United States and its allies today.

Another infamous blunder of the intelligence community, the Bay of Pigs invasion was hastily planned and poorly executed. Dealing with fierce opposition from the newly elected Kennedy administration, the CIA and Allen Dulles, by that time the agency’s director, were extremely determined to go ahead with the plan to invade the Cuban mainland and depose the newly seated Communist revolutionary, Fidel Castro.

JFK specifically stated that he would only supply eight planes to the Cuban exiles and they would not be loaded with weapons, only necessary supplies. Without the full support of the U.S. military, the exile forces were quickly decimated and most were taken prisoner.

Dulles’ sister would later claim that Allen had shown early signs of dementia and what she believed to be Alzheimer’s disease contributing to the lack of leadership and foresight her brother seemed to have in the waning years of his heading the organization. This explanation, although it seems to make sense, was never professionally determined, but was corroborated by some of Dulles’ other professional colleagues.  Shortly after, Kennedy would dismiss Dulles from his directorship position and famously claim to “tear the CIA into a thousand pieces and throw it to the wind.”

The Bay of Pigs operation shattered any chance of negotiation with Cuba, pushed Castro into the open arms of the Soviet Union, and would be seen as one of the most embarrassing political operations of the 20th century.

Even after Allen’s dismissal from the CIA in 1961 and John Foster’s end of tenure of Secretary of State in 1957, the brothers still managed to keep a handle on major world events into the mid 60’s. Being appointed as member of the Warren Commission, the government investigation group that would look into the causes and possible conspirators involved in the assassination of Allen Dulles’ professional rival, John F. Kennedy, Jr.

Creating a whirlwind of controversy even then, this strange placement of a man, who was notoriously fired by the deceased executive, into the commission that would investigate his murder was deeply troubling to many across the country. It’s worth pointing out that as head of the CIA, Dulles had helped engineer the fall of executives in countries like Guatemala and Iran.

Although the Warren Report would eventually point all fingers at the lone gunman, Lee Harvey Oswald, some still find it odd that these brothers, specifically Allen, could have so much effect on a country that never elected them to any office. Ever.