15 Sci-Fi Characters, Their Politics, And Who They Would Support For President In 2016 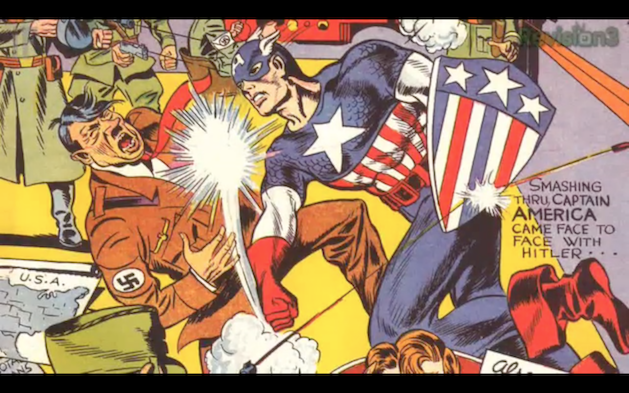 Dystopian wastelands, robot wars, nuclear fallout, genetic engineering, spaceflight…the heroes and villains of our favorite science-fiction movies have a lot on their plates.

Keeping that in mind, it’s not that odd that they tend to have extreme and dearly-held beliefs on the subjects most important to them—just like people in the real world.
Whether they are planning on how to destroy their enemies or plotting to make billions of galactic credits off of their devious schemes, the world of Sci-Fi has just enough of a foot planted in the real world to allow us to make some interesting suppositions about the political views of our space rogues, tycoons, and adventurers.
In creating a list of potential candidates that a character would vote for, could they vote in the 2016 presidential election, a few important details were examined:

Wasting no more time, here is a list of 15 Science Fiction Characters and Their Pick For President of the United States in 2016!


The mother of the resistance isn’t an easy mark. She’s faced certain death at the hand of a dangerous cyborg more times than you can imagine…do you really think she’s afraid of a candidate’s robo-calls?
Getting a former psychiatric patient with an extreme case of the “My son’s basically you’re savior” disease won’t happen overnight and any candidate had better make sure to keep security close if they are planning to knock on her front door.
In the end, Fiorina would get Conner’s vote. Not only is she a women, she singlehandedly brought down a multi-million dollar technology and computer company—just like Sarah.
Sure, Fiorina’s way was a little less explosive in her dismantling of Hewlett-Packard, but she got the job done.


A respected and credible scientist, Cornelius is very devoted to learning about apes and his particular interest of study. Even though all of that is true, he does not know much about anything other than his given field and can come off as judgmental and intolerant. Cornelius would want a leader that is strong-willed, educated, and ready to fight others on divisive social issues.
While he might not understand the plights of the humans at first, he does try to at least figure out how to best integrate them into the ape society. He would not support any form of torture or massive military campaigns.
Remember, he means well and helps his wife save Astronaut George Taylor from the other apes.


A former pilot, the star of Christopher Nolan’s Interstellar now farms corn on what’s left of the good soil of planet Earth. As a man who risks his life in order to be able to provide a better future for his family and the rest of the human race, Cooper would need for his pick for president to value science, education, and most importantly, the environment. The man is dealing with the potential extinction of all of humankind AND missed out on his daughter’s teenage years—don’t expect him to rush to judgement at the ballot box.
If any candidate denies climate change or suggests that not everyone is a good fit for college, they can pretty much assume that they won’t be getting Cooper’s vote anytime soon.
But, according to a gap in the space-time continuum…nevermind.


Brash and extremely sarcastic, Bruce Willis’ character in The Fifth Element wouldn’t care much for politics or politicians. He’s a cab driver and former special operations officer who is just trying to get back on his feet after losing his wife and ending up in a small apartment in the big city.
But, if he had to cast his vote, Korben Dallas would want someone like him–tough and unwilling to bow down to anyone, especially his superiors.
A gruff and aggressive candidate would match Dallas perfectly, but you’d still most likely hear him complain about his chosen candidate, even after a win, having assumed that they’ve become corrupt and out of touch with the every man who just lives day to day.


The only tie on this list, the man of iron is a little harder to pin down. An arms manufacturer-turned-defender of the world, Stark would be more likely to run for president himself than vote for anyone this cycle. But, gun to his head, Tony would want to make sure that the overall safety of the world and its people was the primary concern for his candidate.
While his good business sense and billions of dollars might tempt him to vote for the Donald, his humanitarian/philanthropist tendencies would kick in just as hard as the thrusters on his hands and feet.
This one is a tossup as Tony Stark’s opinions change as quickly as he flies through the air…and supermodels.
Sorry, Ms. Potts!


Owen Grady doesn’t trust authority. He’d rather shoot his rifle and take care of his velociraptors. Maybe drink a shot of Jose Cuervo. You got a problem with that?
The star of the massive blockbuster Jurassic World is a pretty simple to understand Regular Joe. He wants to be able to do his job, get paid, and go home. Can you blame him?
Any candidate that this dino-wrangler would vote for would have to know how to keep military operations in his/her back pocket as a last resort. If you want his support, you’ve got to earn it. Grab a rifle and a dirt bike, you’re helping him track down a vicious carnivore and then you’re heading to the bar for tequila slammers. Man up!


Rational, emotionless, intelligent, kind of a buzzkill, experienced…
No, I’m not describing 2016 Republican Presidential candidate, John Kasich. I’m describing Star Fleet First Officer Spock.
As a man of strict principles and a steady, slow way of speaking, Spock would appreciate Kasich’s political wrap sheet and monotone way of presenting information.
While both of these guys might not be the life of the party, they do their research on many of their positions and simply want to make sure that the person most qualified is at the head of the ship when trouble comes knocking.
Live long, prosper, and GO BUCKEYES!


A victim of discrimination and underdog from birth, Vincent Freeman is a born fighter. After having to resort to extreme measures in order to overcome an unjust and rigged system, Vincent is angry as hell with how the system takes advantage of those that can’t help the circumstances of their birth.
Seen as the logical progression of bad human ideas like racism, gene discrimination would be on the top of Freeman’s mind behind the voting booth curtain. No candidate would be able to get his fingerprint confirmation without first proving that he/she believed everyone should be able to do anything they aspire to do.


This arms dealer from the future has his hands in everything. Transportation, entertainment, flamethrowers, mystical alien stones that can upset the universal order…
By raising massive amounts of money in black market weapons trades, the dastardly villain with the ridiculous accent can keep up his more “legitimate” businesses and live a life of luxury in comparison to the average citizen of Earth. After firing the film’s protagonist and one million other citizens in order to look better for a shareholder’s business, not caring at all that his decision would affect the lives and families of those who depend on him, Zorg then goes on a search for humanity’s only hope for survival– the stones that awaken the 5th Element herself.
Considering that time and time again throughout the film Jean-Baptiste puts the profits of his company above the well-being of his employees and the universe, its safe to say that he would be a fan of any candidate that favors big business, lax regulation, and is quick to go to war. In order to get Zorg’s vote, a politician would require a SuperPAC that would readily take billions of space dollars in exchange for political favors. And hey, if they also promised to push an initiative to purchase a few thousand laser rifles from Zorg Industries…even better! Just don’t be surprised if the enemy has some similar firepower in its possession.


This one is too easy. The guy is insane.
He doesn’t care if the product works, he doesn’t care if the customer is happy, he wants one thing–revenue. If a candidate could guarantee that he could ship in products from China at a lower rate, even at the expense of the worker and the country of origin? Awesome.
As long as Trump doesn’t insult Mr. Jones while he’s sitting behind him in the bathroom, he should have this particular Detroit executive’s vote locked down.


Probably the most easily proven pick of this list (see the picture of Doc Brown #FeelingTheBern below,) Doctor Emmett Brown is a man of science and discovery who values a strong moral character and a quirky personality. From his crazy white hair to his interests in time travel, the Doc would have no problem supporting a candidate that doesn’t fit the typical presidential profile.
While helping Marty McFly fix the space-time continuum, Dr. Brown expressed an interest in the implications of a more “socially popular” president and would be fascinated by the cult of personality that has sprung up behind the elderly senator from Vermont.
A focus on higher education and the stability of the environment would be very important to Emmett, along with a sense of humor and consistency…but let’s be honest.
It’s. All. About. The. Hair.


After the government killed his family and turned its back on this former commando, Snake might have good reason to not put much faith in the United States of America.
He likes his guns and he wants to be able to travel freely, where he wants, when he wants.
If any candidate wants this anti-hero’s vote cast in their favor, they need to make sure and not get in this guy’s way.


Chaos. Just pure chaos.
Okay, maybe Ian would vote for an anarchist, but as far as major ticket contenders, a libertarian is the closest thing.
The mathematician would distrust any and all attempts to contain mankind within the parameters of government and carefully explain to each, uh, and every, uh, one of us why we were completely and utterly, uh, wrong in our choice of candidates.
Let’s just hope that he’s not as right about that as he was about Jurassic Park.


As part of the clean-up crew left over on Earth, this little guy most definitely would vote for anyone who was willing to take better care of his home planet.
After seeing humans become lazy and apathetic, Wall-E would love to see a president that promises to engage the youth vote and curb massive greed in the world of corporations and Wall Street.
The most emotional of the entrants on this list, the tiny robot would be all heart and no metal in his selection for the next resident of Pennsylvania Avenue’s biggest house.


Wild and unpredictable, Heston’s George Taylor is angry at everyone. He’s mad at humanity for blowing up the world, he’s mad at apes for taking over what was left of it, man, he’s even mad at his friends for not respecting his authority.
Forgetting that the late Charlton Heston himself would probably vote for Ted Nugent over anyone of the potential candidates, one has to think that George Taylor would be desperate for some conservative change in the Oval Office.
They even look alike.
Keep your hands off of them, you damn, dirty liberals.