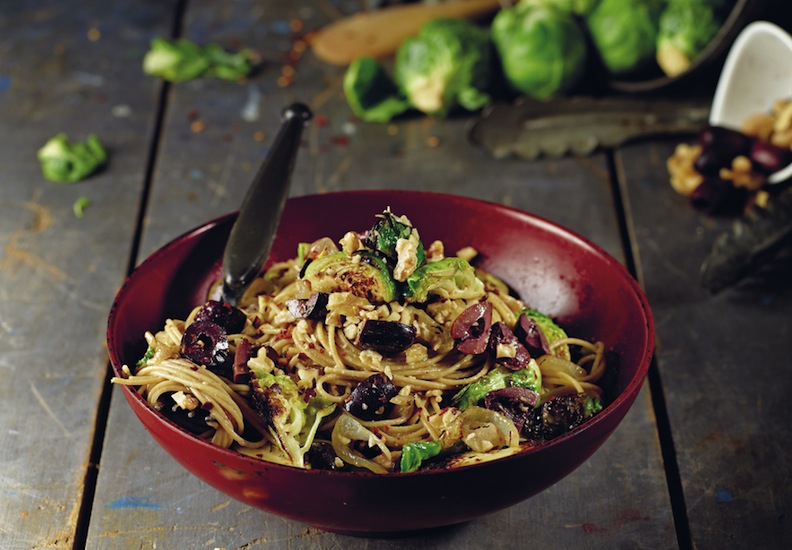 
In Chard with Brussels Sprouts and Red Peppers, halves of Brussels sprouts look pretty mingled with any variety of chard, and they taste wonderful together, too. Olive oil, lemon juice, and garlic bring out sublime flavor in this simple skillet-cooked preparation.


Somewhere along the way, someone figured out that roasting brings out the very best of flavor from brussels sprouts. And adding a glaze of apple cider assures that a full pan of Cider-Glazed Roasted Brussels Sprouts, with their warm, sweet flavor, will disappear quickly!


Sweet and spicy Maple-Sriracha Roasted Brussels Sprouts with Cranberry Wild Rice makes a handsome dish that can be served either as a side dish or entrée for special occasions—it’s particularly fitting for Thanksgiving.


Brussels sprouts are often paired with bacon for that hint of smokiness. Instead of adding some type of meatless bacon, Smoky Maple-Chipotle Brussels Sprouts makes use of chipotle peppers in adobo sauce. Chipotle peppers have a distinct smoky flavor (as well as some heat!). Like the previous recipe, maple syrup helps balance out the spiciness.


A slightly sweet glaze of red wine gives Wine-Glazed Brussels Sprouts a deep, rich flavor. This is an easy and tasty way to serve Brussels sprouts for everyday meals. Double the recipe to serve at a festive Thanksgiving meal.


In Roasted Brussels Sprouts and Apples, the outer layers get a little bit browned and crispy. And everyone loves browned and crispy! Kirsten at Oh My Veggies says her favorite thing to do with roasted brussels sprouts is to pair them with sweet flavors. Usually she goes for just one sweet addition, but this time she adds three: dried cranberries, apples, and a drizzle of maple syrup.


Typically, brussels sprouts are roasted or skillet-cooked but have you ever had them raw? In Shaved Brussels Sprouts Salad with Pear, Cranberries, and Vegan Parmesan, they’re combined with dried cranberries, toasted almonds, fresh pear, and vegan Parmesan cheese for a slaw-style salad like you’ve never tasted before.