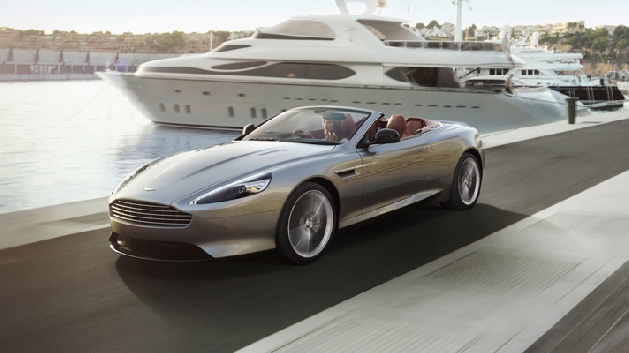 The Aston Martin DB9 is a highly desirable and visually appealing drop-top grand tourer. Both the Coupe and Vol ante models are known for high performance and luxury that its maker is typically known for. From the previous model, both the variants underwent a style update for a freshened look and slightly revised interior and more powerful motor.
Though it had got some updates but the exterior facet including the classic proportions and graceful stance remained somewhat unchanged. However, several new details have been added to the latest convertible model, which were missing in the predecessor. For instance, the headlights are more angular and swept-back than before whereas the front fascia has received a streamlined single-intake design.
Talking to the styling, the DB9 Convertible is one of the most beautiful cars that a person can ever own. Despite a few amendments and upgrade, the model still carries off the classic Aston look with much ease. Though it has a classic exterior, it has a few modifications and improvements in the materials and texture to offer a more beautiful cabin that is exquisitely crafted and well finished.
The Vol ante model isn’t as stiff as the Coupe, but both the variants are a driver’s delight. It offers massive thrills with the added sensation of speed and wind as well as noise that a convertible allows. Also, the sound of 510bhp V12 bouncing off walls makes the driving more sensational. Whether Vol-ante or Coupe, some features are same – 0-62mph time of 4.6-seconds and the three-mode suspension. It turns in sharply and offers masses of grip to grant more control while driving. The carbon ceramic brakes are fitted as standard are excellent and has awesome stopping power. Even if there is a tiny bit of body shake, the vehicle is remarkably stable and offers a smooth ride.
The first models which sold in 2004 have been refined and honed with reliability improving all the while. The engine – 6.0-litre V12 – is well proven and used throughout the Aston range leaving no scope for bugs. Driver would not feel any problem with engine, transmission or drive line thus reliability is ensured. In terms of quality, the interior is well made to withstand the test of time. Both Coupe and Vol ante of DB9 Convertible have standard safety kit like airbags, traction and stability control as well as new front end to meet pedestrian safety legislation. In all of this, it maintains the traditional Aston front grille.
Get more information about DB9 Convertible visit HWM Aston Martin

Published in Hi-Performance, Import and Videos