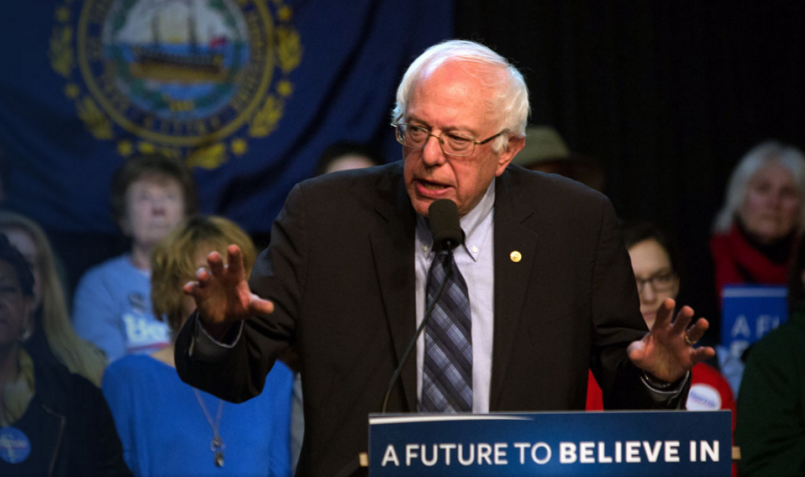 The Bernie Sanders “Socialist Jew” Meme Is Stupid And Lazy

I can’t open Facebook without seeing some variation of the following meme: some version of Buddy Christ with some version of this sentiment first expressed by John Fugelsang in this tweet:

Forget for a moment the basic incoherence of “voting for” and “celebrating,” what is truly lazy and stupid about this meme as it gets slapped on photos of Jesus suffering the little children unto himself, or on the actual Buddy Christ from Kevin Smith’s Dogma, is that it seems designed to be shared among fellow travelers exclusively for back-slapping purposes or to annoy non-Sandernistas. This sentiment is basically, “Christians are stupid,” which in itself is a perfectly acceptable opinion to hold (I know a lot of Christians who are indeed not very curious about learning much about the world around them), but one that is quite obviously not going to win any converts to your side. And just FYI: winning elections quite literally means you need to convince people to convert to your side, at least long enough to cast a vote.

Then there’s the meme, which uses bullet points to highlight the similarities between Jesus and Bernie Sanders: both are Jewish, they both worked as carpenters, both are socialists. Like, the guy with a “My Boss is a Jewish Carpenter” bumper sticker is going to see this meme and put 2 + 2 + 2 together and think to himself, “Maybe Jesus was a union carpenter…that’s socialism…and I know Bernie was a shitty carpenter…maybe Jesus was too, I mean he only did that job because his step-dad made him and if he was any good at it he wouldn’t have left to organize a group of like-minded individuals and go around speaking in front of massive crowds and denouncing rich people…you know what? I’m getting rid of this Carson bumper sticker and feeling the Bern!” This attitude goes along with the general mansplainy tone of a lot of Berners, you can actually see them adjusting their fedoras as they share this meme and then go on about how lady parts don’t automatically make you a SHILL-ary supporter and then remember they have an ultimate frisbee game coming up so they better leave the house.

In addition, the Christians who support Bernie Sanders already know all of this; the ones who don’t are unlikely to be persuaded by this half-assed theological reasoning. Trump, last seen being chastised by the Pope for his constant blather about walls, is pulling support from the people who “christianity” is really an expression of white, resentful identity, terrified they’re losing whatever it is that made them great (see also: Pat Robertson’s insane claim that Jesus would care about “demographics“). Still others, who also may share this concern about “demographics,” are more concerned with eschatology, such as Ted Cruz supporter Mike Bickle, who says that any Jew, socialist or otherwise, is going to be killed if they don’t accept his apocalyptic version of Christianity (and let’s not forget the “Jesus will be packing an AR-15” guy). Still other Christians, followers of the Prosperity Gospel (think Joel Osteen, sitting on Oprah’s couch blathering on about what G.K. Chesterton would have called “the horrible mysticism of money”) won’t recognize the Socialist Jew Jesus at all. It’s also why arguments like this, which take theological claims seriously, don’t really work: conservative Christians are mainly interested in “demographics.”

The other, related subtext of the Socialist Jew meme is the messianic fervor with which many Sanders supporters exhibit but which they may not want to admit. The problem here of course is that, as both a Jew and as someone “not actively involved with organized religion,” Sanders would certainly reject any implication that he is some sort of messiah. And since he also recognizes that people can “worship” one thing and “vote” for another, I can only guess–but it’s an educated guess based on an assumption that Bernie Sanders is not insane–that he’s also read the rest of the story, and would rather not be publicly tortured and then murdered by the state. The last thing we need is a future Mel Gibson making a blockbuster sequel, “The Passion of the Bernie.”

So feel the Bern. Send him some cash and volunteer. But stop sharing this stupid and lazy meme. Every time I see it it’s like, to paraphrase the (possibly apocryphal) words of Gandhi, “I like your Sanders. Your Sandernistas? Meh.”