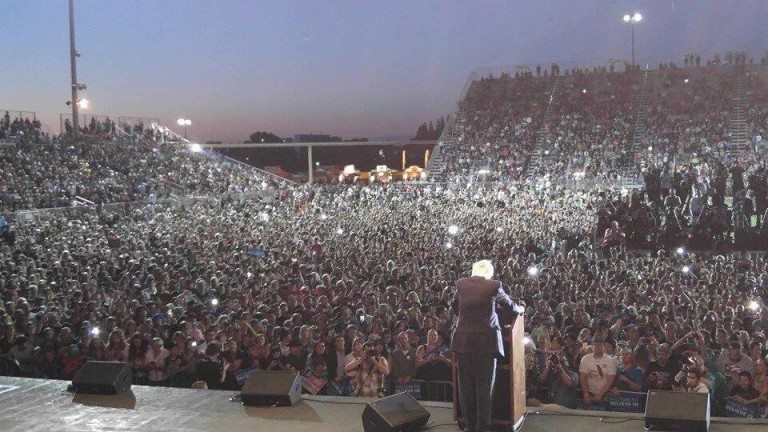 Bernie’s Campaign Is Fizzling, Only Attracts 21,000 People to Rally in Sacramento

We’re sorry to be the bearer of bad news to Bernie Sanders supporters, but his campaign seems to be struggling mightily to maintain its grassroots support. At an event in Sacramento on May 9, the Sanders campaign was only able to attract 21,000 attendees to the rally, down from the 27,000 people who saw him speak in Washington Square Park in New York City back in April. This kind of drop off is in stark contrast to the Clinton campaign, which has been able to maintain its dozens of supporters at nearly every rally.

Especially troubling for Sanders is that California is one of the whitest states in America, suggesting he can’t even win the white vote anymore.

Twitter user fastlife3o5 tweeted the following picture depicting the disheartening scene, driving home the point of just how poorly the Sanders campaign is doing in maintaining support through the entire primary process. I mean, look at those seats. You can barely even see Bernie they’re so bad.

This is what 21,000+ looks like at a Bernie Sanders rally in Sacramento #BernieInSacramento#FeelTheBern#bernie2016pic.twitter.com/RMK4aKK8NO

The disappointing showing wasn’t the only issue for the Sanders campaign. Despite the relatively small number attending, apparently there were incredibly long lines of people just waiting to enter Bonney Field, a soccer-specific sports venue that seats 11,000, and security was unable to get everyone inside in time for the event to start.

21,000 people showed up to see @BernieSanders at his rally in Sacramento, CA today. #BernieInSacramento https://t.co/HoTxWEEJcK

Some reports estimate that at least 10,000 people never made it inside the stadium, which must have been a huge relief to those people because they are totes ready for Hillary.

Joking aside, the record crowds Bernie Sanders has been attracting to his rallies speak volumes to the impact his campaign is having on shaping the political ideals of the American Left, a group of citizens tired with incremental progressivism slowed down further by corporate politics, to say nothing of the job it’s done mobilizing the youngest voters in society, who are notoriously terrible at participating in the democratic process. Bernie Sanders has also united independent voters in ways no other candidate has done in the current two party system, making him a weak general election candidate and completely unelectable on the national stage, because naturally.

Now he just needs those people to be able to vote in every primary, but his campaign was ill-equipped and unprepared to replace archaic voting laws the Democratic Party loves, which eliminated the voice of independent voters in several important states (Florida, New York and Pennsylvania come to mind, where Bernie Sanders could have eliminated Clinton’s lead had independents been allowed to vote).

While it’s true he faces (obscenely) long odds to secure the nomination from the Democratic Party to run for president in the general election, his movement and political principles seem set to survive. If Bernie hopes to somehow pry the nomination away from Hillary Clinton, he’ll have to figure out how to turn huge rallies into huge voter turnout, something he struggled with in New York, where independent voters had to register as Democrats in October of last year in order to vote in the Democratic primary in the state and where thousands were purged from voter records or had their party affiliation switched shortly before the state’s primary. Sure, New York has the some of the worst voter laws in the country, but that’s no excuse for Bernie not convincing people in New York to vote for him by the registration deadline, even if that was 7 months before the primary. Typical Bernie supporters, too ignorant to know how awesome he was before they got a chance to hear him speak.

Whereas voters would have had to register to be a Democrat in New York before the first debate was ever held, because that’s super democratic, voters have until May 23 in California to register as either a Democrat or unenrolled in order to vote in the Democratic primary, giving Bernie a better chance out west than he had back east. At the same time, those who prefer Hillary Clinton have the same deadline. Just a side note, registering as an Independent in California puts you down for some obscure political party and prohibits you from being able to cast a Democratic ballot.

The California primary is being held June 7.

Lastly, for the sake of full disclosure, I voted for Bernie Sanders in the Tennessee primary and I’ve donated to his campaign. We believe in transparency at Men’s Trait, unlike glorified gossip columnists and those looking to make a name for themselves (and pretty much everyone else in media).

Edit: An early version of this article stated that Ohio was a closed-primary state, which is incorrect. We’ve since whipped the writer for getting such an easily checkable fact wrong.