Breaking down Rogue One easter eggs 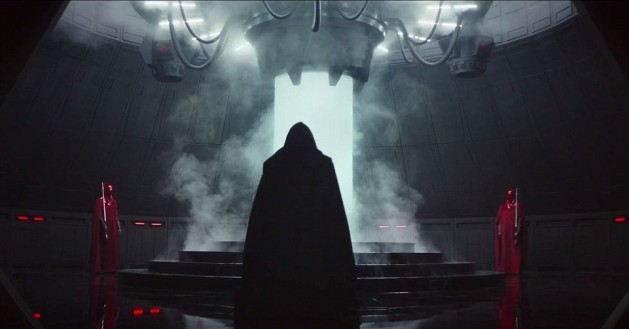 Unless you’ve been living under a rock, then you know that there’s a new Star Wars film. Rogue One, the first of the Disney sanctioned Star Wars standalone films, is in theatres and making a boatload of cash; a $155 million boatload, to be exact. Chances are you’ve probably already seen the standalone space heist film, or are planning to do so during the holiday weekend. Who knows, maybe you’re one of those Star Wars obsessives that plan on seeing the film at least three times, so as to bask in its total and unequivocal escapist glory.
We’ll avoid major spoilers in this post –remember, this movie bridges the gap between the Clone Wars and A New Hope – though the outcome has been around for nearly half a century now. For those who don’t remember, the iconic opening crawl of Episode IV: A New Hope references the events that take place in Rogue One.
Let’s not get into the specifics, per se, but let’s talk shop about Rogue One. The big concern for most going into Rogue One wasn’t whether or not the film would make money (Star Wars prints money at this point), but whether it would provide proper fan service while bridging the gap between the prequels and original series. To put it in layman’s terms, we’re talking Easter Eggs.
If you were one of the fortunate folks who didn’t have to sit through an entire film of fanboys of The Force gasping at every allusion or reference to the Clone Wars or original series, then you may have missed some of these major Easter Eggs. Here just a few of the Eater Eggs you may have missed upon your first viewing of Rogue One.

This was a blink and you’ll miss it tiny, minuscule Easter Egg that came in the beginning of Rogue One. If you’ll remember in A New Hope when Luke’s aunt served him what’s known as Bantha milk (aka “Blue Milk”), everyone thought it was the most clever thing ever. Fast forward (or rewind?) to Rogue One, and in young Jyn’s home, a pitcher of blue milk can be seen. That’s it, small Easter Egg.

Alright, this was a pretty obvious Easter Egg, that featured actor Jimmy Smits of the prequel series (one of the few good things) making an appearance as a member of the Rebel counsel. If you don’t remember, Senator Organa and his wife adopt Leia after the events of the Clone Wars and raises her as his own. Chances are the Bail Organa scenes were added in the infamous reshoots, because in the film his scenes feel a bit jaunty.

Oh yeah! Take us back to Mos Eisley Cantina, why don’t you? No clarinet-y music on the trade planet of Jedha, but, when Cassian and Jyn Erso were looking for Saw Gerrera, they bump into the two swarthy fellas who can be recognized from the Cantina scenes in A New Hope. Both look just as ugly as they ever did.

This was a cool Easter Egg. The dog-fighting X-wing fighters have always been a fan favorite (and should eventually get their own film, if you ask me), and Rogue One did not disappoint. The film featured the famed Red Squadron (but no Porkins!) along with the new Blue squadron that featured female pilots! Good on you Rogue One, some equality in the galaxy for once!

The familiar locale of the Rebel base was first seen in A New Hope, and it was back in Rogue One. When the rebels help Jyn Erso escape they take her back to their jungle base of Yavin Base, where we see familiar faces in Mon Mothma and Bail Organa for the first time.

This was an important Easter Egg, even if the actor who played Grand Moff Tarkin in the original trilogy had long been dead. How did they get the character back, you ask? Well with some near perfect CGI – but he still had that weird uncanny valley that happens when CGI is good, but not quite good enough. Anyway, it was nice to have Tarkin their to menace the already menacing Director Krennic.

The Whills might be the most important of all the Easter Eggs found in Rogue One and it wasn’t even a reference from one of the original films! When Cassian and Jyn are on Jedha and we see Chirrut Imwe and Baze Malbus for the first time, Cassian references the fact that they used to be part of The Whills, otherwise known as guardians of the Kyber temple on Jedha. The Journal of the Whill is referenced in the novelization of The Force Awakens, and could certainly make for a cool standalone idea when Disney runs out of ideas.