Why you shouldn't be afraid to eat donuts for breakfast 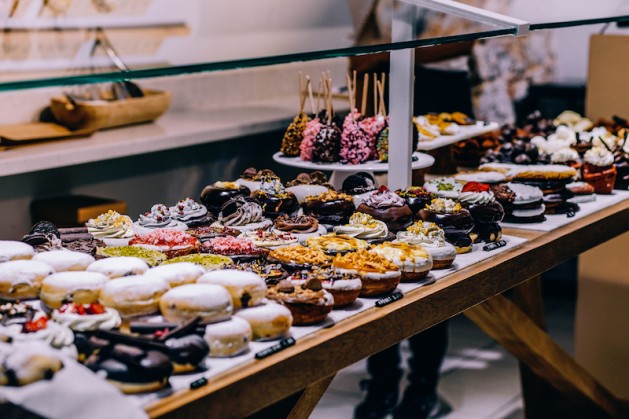 So allow me to make a somewhat embarrassing confession: I eat donuts for breakfast at least twice a week. And I’ve done it for years now. I understand, of course, that this isn’t a habit most people would consider “healthy” or not “kind of gross,” but give me a chance to defend myself before you totally make up your mind. So, first let me say…

Easting donuts for breakfast does not equal obesity

Now it can, and the type of people who eat a lot of donuts for breakfast also tend to be overweight. But those two things aren’t linked as closely as you think. I personally, with my disgusting dough-lust, am not obese. In fact, my body is quite typical for a mid-twenties guy who hates strenuous exercise.
So how is it that I can eat donuts for breakfast twice (and if we’re being totally honest sometimes more) a week and not have to be wheeled out of the house through a hole cut into the wall?
Well, most people will say that loading up with carbohydrates and calories (i.e. fried dough) early in the day is a recipe for weight gain. And frankly, they’re right. Carbohydrates are great fuel for vigorous physical activity, but you’re probably not planning to run any marathons most days, right? And loading up on carbs and then not doing anything isn’t a good way to loose weight.
Buuuuuut.. here’s the thing: ultimately what you eat is not as important when it comes to weight gain as how much you eat. And in spite of what all those trend diets have been telling us, one calorie of carbs is the same as one calorie of protein when it comes to your body storing it as fat. For proof, look at this Harvard professor who lost 27 pounds while only eating twinkies.
And if that act of self-loathing tells us anything about weight gain, it’s that it’s all about the calories.

Here’s the thing, when you choose to eat a donut for breakfast, you have to consider the fact that ounce for ounce, a donut is an extremely caloric breakfast option. Just about anything short of straight lard would be a better choice if you’re trying to lose weight.
So, it’s important to exercise a little bit of restraint.
The average donut has about 200 calories, which means that if you limit yourself to two, you’re actually getting a pretty average meals worth of calories. So, eaten responsibly, donuts aren’t going to make you fat. The danger lies in picking up a box of six and getting carried away so that before you know it you’ve eaten a whole day’s worth of calories before noon.
I have done this and wouldn’t recommend it.

Sometimes a donut can be a good choice

Remember when we were talking earlier about all the carbohydrates in a donut and how they work as a great fuel source for your body?
Well if you actually are going to exercise that day, all those carbs are a great way to get the energy you need. Plus the fact that you can get a donut nearly anywhere and for less than a dollar makes them a convenient option for days when you just need some quick breakfast fare.
And let’s not forget how important breakfast is. People who skip breakfast tend to be more overweight because they over-compensate and binge at lunch. And their metabolism doesn’t work as vigorously as those who get regular smaller meals. That means that given the choice between a donut and skipping breakfast, you should go with the donut.

And finally, I’m sure we can all agree that donuts are just delicious, right? Jelly, creme, glazed, no matter what your particular favorite is, a good donut is a thing of beauty.
Why deprive yourself of that when you don’t have to?
Just remember, as in all things, moderation is the key.