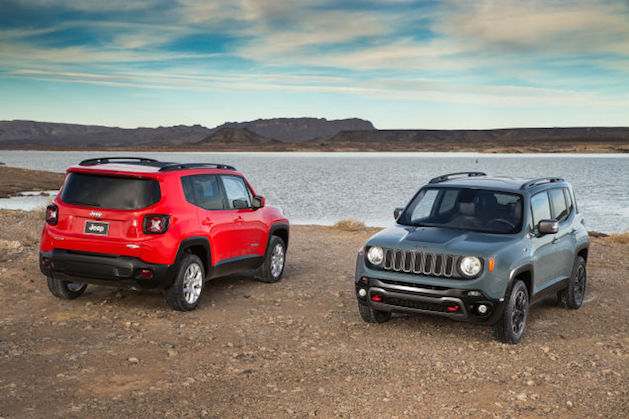 Flexibility Is Key for Jeep in 2015

By Jeremiah Lechler
The Jeep Renegade is coming to Australia in 2015, filling a hole at the lower part of the company’s range. It will be entering a tough market, competing with models from Ford, Skoda, Mitsubishi, Nissan and Suzuki.
That was said by Jeep CEO Mike Manly at the recent Detroit Auto show. For traditionalists that is good news as the Wrangler is one of only a handful truly iconic vehicles, and arguably the most recognisable of all.
Changing it would cause ructions that would affect the popularity of the Wrangler, and Jeep as a whole. Let’s face it – grumbling about new models is a Jeep thing, but if the Wrangler stopped being a ‘proper’ wrangler (yes, TJ owners, the JK is a proper Wrangler!), the grumbling would be deafening.
The rest of the Jeep range? You know how the new Cherokee looks different to anything that has gone before it? Expect more of that, because Mr Manly said that Jeep was going to be a lot more flexible with its shapes.
Pointing to the KJ, KK and KL cherokees as examples he said that Jeep had experimented with flowing lines, moved to boxy, and now with the KL, a completely different look, all to broaden their appeal.
He said that the cars will still be recognisably Jeeps, but the looks will evolve. “you’ll start to see how flexible we can be,” he said.
Given how well jeeps have been selling in the last year, he may well be onto a winning formula, and certainly has a bit more wriggle room to experiment.
Chrysler might be preparing to deliver just what you’re after – the Pentastar UpGrade (PUG), which will add a turbo to both the 3.6 and 3.2 Pentastar engines. They’re not just slapping on a turbo kit and calling it a day, instead they’re reworking the engines to add direct injection and variable valve timing too.
The changes will bring increased output and reduced fuel consumption to the engines and helping Chrysler meet its CAFE obligations.
The ‘new’ 3.6 V6 may make its first appearance as sooner rather than later, being rumoured to be fitted in the 2016 Grand Cherokee, due later this year.
We’ve been looking closely at Jeep’s successful 2014, and what a year it was!
A slew of solid products, new and old, have propelled the company to its greatest number of vehicles sold world wide – 1,017,019 (692,348 of those were in the US). That beats the previous record year, 2013, by 39%.
Worldwide, the breakdown by vehicle was as follows: Grand Cherokee – 279,567, followed by Cherokee – 236,289, Wrangler – 234,579, Compass – 134,629 and Patriot – 122,387. The Renegade, while it officially went on sale in Europe in September and has reportedly been doing well, does not appear in the figures.
In Australia, Jeep has done particularly well, selling 30,408 vehicles (Chrysler sold an additional 17,422). For Jeep that’s an impressive 37% increase year on year, and the company even entered the top ten for the first time ever in September, when the Cherokee was launched. The Grand Cherokee managed to break into the top ten selling vehicles for the first time in May.
The Grand Cherokee continues to be a particularly good seller, with 16,582 sales, giving it 15.4% of the market in its size segment. This compares favourably with its supposedly more popular rivals in the size bracket – the Prado with 16,112 sales and 15% of the market, and the Kluger with 11,484 sales and 10.7% of the market.
For comparison’s sake the Landcruiser sold 9,067 units, and the Patrol 1,859.