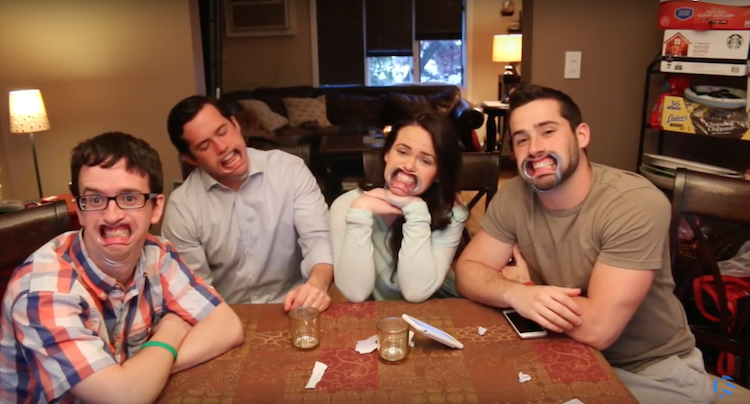 Joe Santagato is one of the best things on Youtube, period.

The internet is a black hole that literally sucks the life out of you on a daily basis. But every now and then that same vortex give us life in the form of NSFW Youtube videos. I’m always able to stumble upon half-assed memes that give me a good hearty chuckle, but rarely do I find something that makes me laugh so hard I snort mucous down to my chin—in all transparency, that didn’t actually happen, but I did watch that happen to Keith Santagato after a particularly brutal mad libs game.

Who am I talking about, you may ask? He’s only the older brother of Youtube darling, Joe Santagato, former producer and host at Elite Daily, vlogger and star of the Youtube channel SantagatoTV. After getting his first camera at the age of 13 and using it to record himself scaring the shit out of his brother, the kid decided to find his niche in satirical videos. Now the 25-year-old New Yorker spends his time filming he and his siblings playing games. What? You say that sounds like a snooze fest?

Just watch this first. It’s OK—we’ll wait. (If you’re easily offended by the use of crude language, we would advise that you not watch this video. Instead, here is a link to a video of a kitten playing with yarn.)

Enter, Mad Lib Madness challenge, in which Keith or Joe Santagato simply answer the first noun, adjective, adverb or verb that comes to their mind, especially if it’s a racy word. Pt 4 might not actually be the funniest Mad Lib challenge video out there, but it is the one in which snot runs down Keith’s (that’s the one who rubs his nipples in the first 10 seconds) face.