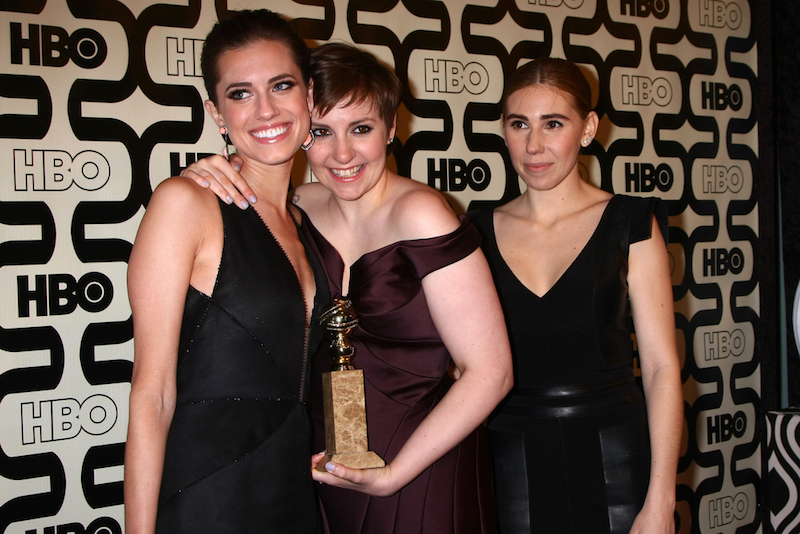 Why Lena Dunham's unphotoshopped thigh is giving us hope

In case you haven’t heard, Lena Dunham and her team of leads from the HBO hit Girls graced the cover of Glamour magazine’s February cover, completely unretouched and unphotoshopped, as Glamour produced an issue that was 100% produced by women.
Girls is widely popular, and best known for it’s honest and real portrayal of sex and being a millennial woman living in the city. In fact, most of the show’s premise was drawn from the creator’s (Lena Dunham herself) real life experiences.
Dunham, along with costars Allison Williams, Zosia Mamet and Jemima Kirke, got pretty real in their interview with Glamour, explaining the anxiety, tension and joy that went into making and sustaining the show.
According to ET Online, Dunham explains how she often felt left out of the circle:

“Sometimes I would get very lonely, because I wanted to be a part of the group, but there was also the element of, like, having to boss people around,” she admits. “And we would be doing all this as a team, [but] if we got criticism, I felt like it would all come down on me in this sh**-storm torrent. Even though I was surrounded by love, there were times where I felt very ‘by myself’ in the process.”

But despite the blips along the way, Girls has remained very popular and in high demand since the show’s first airing in April of 2012.
Regardless of the show’s popularity and success in its own right, another huge success has been won by means of Dunham, who chose to forego photoshop in her recent cover, baring cellulite and all.

“Well, today this body is on the cover of a magazine that millions of women will read, without Photoshop, my thigh on full imperfect display,” Dunham points out on her Instagram.

“Throughout my teens I was told, in no uncertain terms, that I was f**king funny looking. Potbelly, rabbit teeth, knock knees — I could never seem to get it right and it haunted my every move,” she writes. “I posed as the sassy confident one, secretly horrified and hurt by careless comments and hostility. Let’s get something straight: I didn’t hate what I looked like — I hated the culture that was telling me to hate it.”

And that’s just it. There’s nothing wrong with our bodies, there’s something wrong with they way society perceives beauty and uses that perception to push women (and men for that matter) to bust their asses to fit an unrealistic, alien-like ideal.

“When my career started, some people celebrated my look but always through the lens of ‘Isn’t she brave? Isn’t it such a bold move to show THAT body on TV?’ Then there were the legions of trolls who made high school teasing look like a damned joke with the violent threats they heaped on, the sickening insults that made me ache for teen girls like me who might be reading my comments.”

Dunham, no stranger to the horrible effects of being bullied well into her late twenties, has finally had enough. Instead of changing herself to make the problem stop, she’s decided to change the game instead.

“Whether you agree with my politics, like my show or connect to what I do, it doesn’t matter — my body isn’t fair game. No one’s is, no matter their size, color, gender identity, and there’s a place for us all in popular culture to be recognized as beautiful.”

“Haters are gonna have to get more intellectual and creative with their disses in 2017 because none of us are going to be scared into muumuus by faceless basement dwellers, or cruel blogs, or even our partners and friends,” she continues. “Thank you to the women in Hollywood (and on Instagram!) leading the way, inspiring and normalizing the female form in EVERY form, and thank you to @glamourmag for letting my cellulite do the damn thing on newsstands everywhere today. Love you all.”

Major steps were taken the minute the magazine editor gave the okay to forego photoshop on a popular women’s magazine.
And here’s how.
In the fashion industry, we see a particular form praised – the slender and tall woman with distinctive features. This isn’t to say that that is necessarily a bad thing. Fashion is art. Art is perfected to the artist’s standards, these artists in particular being the designers and magazine editors. But somewhere along the road, the fashion industry has blurred the lines between reality and fiction, making real women feel like their skin must be matte, legs long, eyes big, and thighs cellulite-free, just like the models being displayed in magazines throughout the world.
Women and men alike have absorbed this media, unconsciously being told one thing: Beautiful women look like this.
Women, beautiful by nature, not by cultural standards, are not born looking like a Mario Testino photograph. It is only through social constructs that women feel as though they owe it to society to shave hair off their bodies, have darkly rimmed eyes and long lashes. All of which take a product to actually get to said goal of “feeling feminine.”
The problem is the standard that has been set. It’s the idea that women can potentially look like they’ve been photoshopped and airbrushed in real life, rather than just in a well planned out photograph for a highly praised publication.
What Dunham’s and her costar’s statement to forego photoshop is really saying is that WOMEN are still WOMEN whether they look like what we’ve been seeing in magazines or not. Whether their waists are slim or not. Whether they have cellulite or not. Whether they shave or not. And whether you think they’re pretty or not. Because the power of women isn’t in the way they look, but in their strength and determination to better the world.
So, on behalf of women everywhere (or at least likeminded women), thank you, Lena Dunham, for being real with us and making a statement that says “I’m not the standard you’re used to, and that’s a good thing.”

Published in Beauty and Entertainment