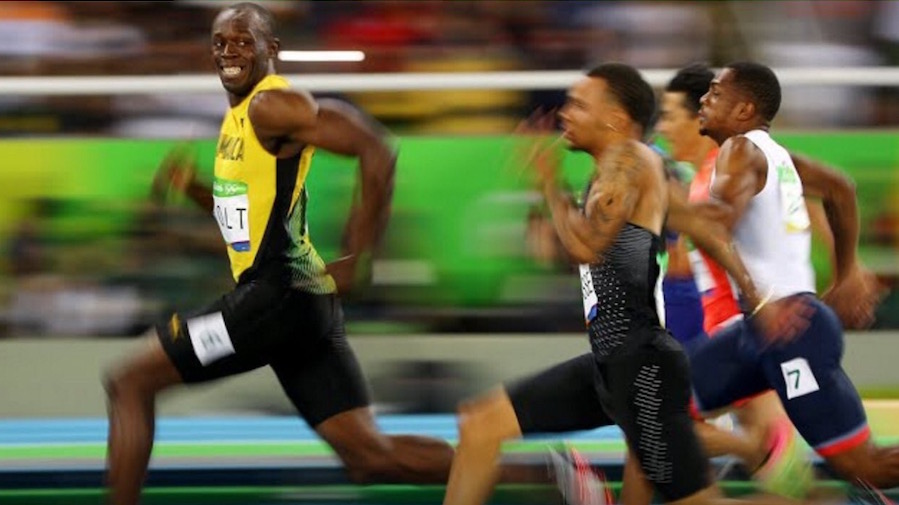 Now that swimming has all of about closed out its run in the Olympics, its time we shift our prime time event attention toward the glimmering sheen of the track stadium lights in Rio. Where the swimming finals were slick and splashy, the track and field finals are swift and flashy – nary a moment overlooked as an opportunity to gloat. Further extending the parallel imitation of the two prime time stages, where the swimming finals were marred by the occasional unswimmable green pool, the track and field finals sit under an ominous shroud of security uncertainty and lackluster attendance, but nevertheless, the athletes still manage to steal viewers’ hearts.

Where Day 8 saw the final Olympic action from the Olympic legend of the sea – Michael Phelps – then it only seems fitting that Day 9 would see the final Olympic action from the legend of the land, Usain Bolt. The man with arguably the greatest sports name in history who just happens to be the fastest man to ever walk to face of the Earth lined up on the starting blocks to take off one more time at the sound of the starting gun.

Every time Usain Bolt took to the field in qualifying rounds, he was met by chants of his name almost instantly. He was the unequivocal hero of the track, while longtime adversary Justin Gatlin was the Games’ proverbial villain, being booed at any and every instance. Its been a tough go for Gatlin since he last won gold in 2004, as Bolt’s flourishing dominance has all but made him the belle of the track and field ball every Olympics, and Day 9’s men’s 100m final was no exception.

From the race’s onset, Justin Gatlin actually appeared to create a sizable gap between himself and the rest of the group, including Bolt. The first 25 meters were almost all Gatlin, and for a brief moment, it appeared as if Bolt’s swan song final would be stolen by the two-time doping banned American. Bolt’s magnificent size – 6’5”, 207 lbs – undoubtedly played into the slow start, as there’s simply more of Bolt to get moving than Gatlin – 6’1”, 183 lbs – or most other sprinters. But in the end, the size doesn’t really matter (or maybe it does), because Usain Bolt pulled off his third consecutive gold in the 100m event, a feat never before completed, and will likely never again be repeated.