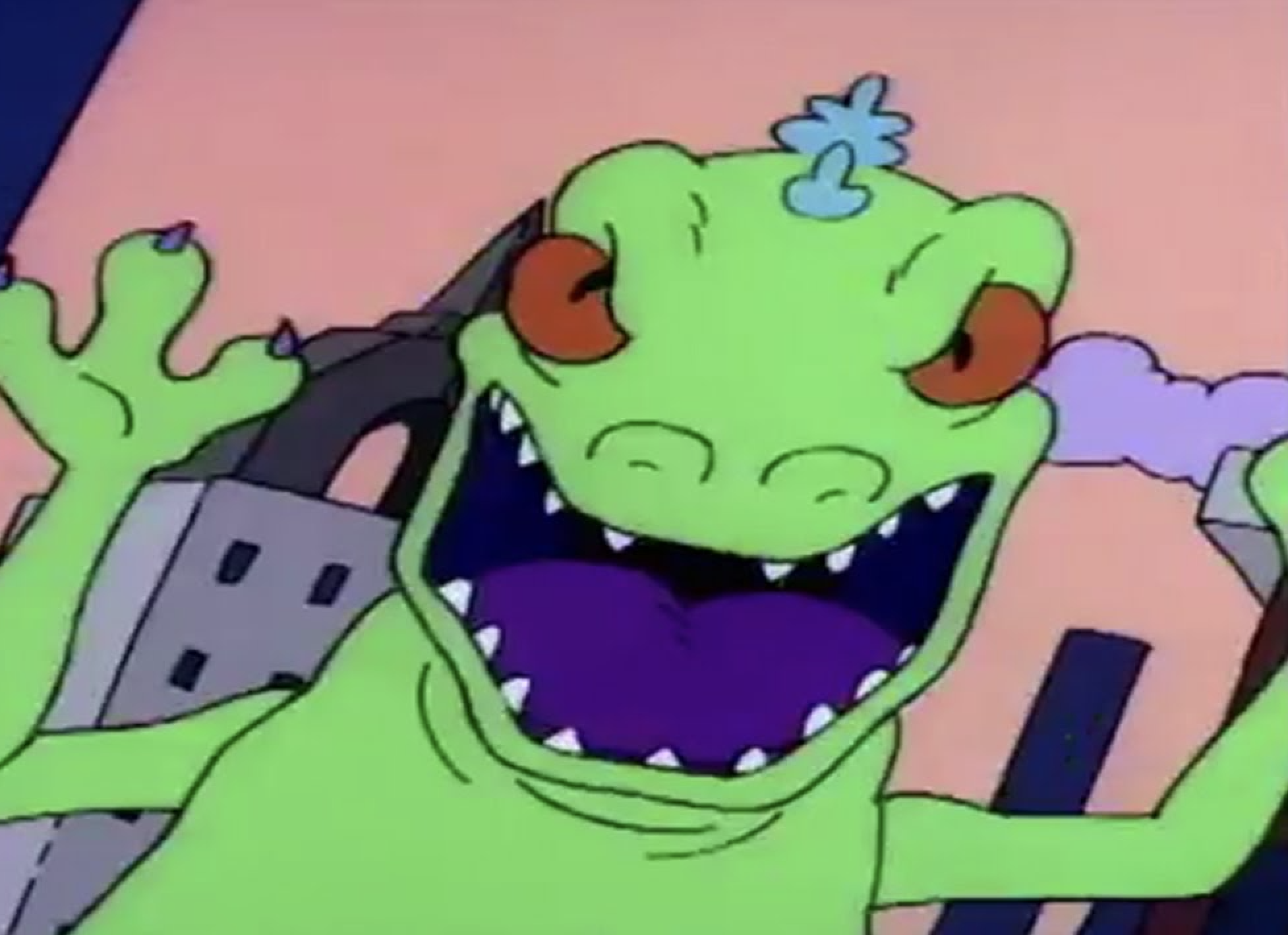 Reptar: The Ultimate Nicktoon Hero We All Love

In 1998 The Rugrats Movie came out and Reptar was released on the masses. Audiences loved the cartoon dinosaur T-Rex. Accidentally on purpose, Niktoon had created the ultimate Nicktoon hero.

Tommy Pickles invents this living dinosaur in his imagination when he and his family get lost in the woods. From then on, Reptar becomes a hero whenever Tommy needs help.

How Did Reptar Come on the Scene?

Reptar came into Tommy’s life when Stu Pickles, Tommy’s dad, built Tommy a dinosaur wagon. Since Stu is a genius inventor, the Reptar Wagon didn’t just haul building blocks. It could do a variety of things like talk, turn into Aqua Reptar when it needed to become a boat on the water, and breathe fire, just like a dragon. What little boy wouldn’t love a fire breathing dragon?

Little Tommy Pickles ends up loving Reptar, and history is born. Tommy and the gang take him along on all the important Rugrats expeditions. In the movie, Reptar is there when the Rugrats take Dil back to the hospital. Dil is Tommy’s newborn brother. Everyone loses their way in the forest, though.

What Other Rugrats Movies is Reptar In?

In the next movie, the dinosaur plays a lead role as a giant robot. In Rugrats in Paris, the poor dinosaur’s head falls off a couple times, but Stu comes to the rescue. Again, Reptar is another character, as the Rugrats take him along to the church to intervene in the wedding.

Tommy’s imaginary dinosaur shares many similarities with Godzilla. Reptar is neon green because he has been irradiated. His giant body is like Godzilla, and his powers over other beings is also like Godzilla. All the Rugrats adore the dino. He is the quintessential friendly giant that protects the Rugrats from anything and everything that threatens them.

At one point, Reptar seems to turn into a malevolent monster, though. It begins to destroy Tokyo. But in a surprise (surprise!) plot twist, it turns out that the lovable dinosaur has an evil twin. The monster version of the imaginary dinosaur is actually a robot that is set out to destroy the city. Tommy Pickle’s beloved Reptar fends off the mechanical evil twin. During the fight sequence, the fake skin is shredded from its body. The exposed mechanics beneath the synthetic skin reveal the imposter’s true make up.

Rugrats was created by Arlene, Klasky, Gabor Csupo and Paul Germain. The Rugrats cartoon series was developed especially for Nickelodeon. The show’s characters are a group of toddlers and some older cousins, as well as a group of adult parents. The adults in the Rugrats shows and movie are portrayed as being present but not present. They are often blissfully unaware of what the Rugrats are up to. The most unique thing about the show is that its perspective is that of the toddlers. Tommy Pickles is the “star” of the show. Tommy and the rest of the Rugrats enjoy a rich imaginative life that takes them beyond their real life adventures. That’s one reason why Tommy’s imaginary Reptar monster friend makes such a perfect additional character.

Reptar’s popularity makes it ideal for merchandising. Related merchandise made in his image has popped up all over the place, from inexpensive clothing all the way to design apparel at top price points. Popular fashion brands like Hot Topic have incorporated him into their fashion lines. Fans can get t-shirts, lunchboxes, mugs, and posters. Amazon sells hundreds of Reptar products that still fly off the shelves. In many ways, Reptar has eclipsed the Rugrats in terms of popularity (and size!).

Since 1998, he has made its way into our popular culture and earned a place in history. It’s unlikely that out love affair with dinosaurs in general will end anytime soon. Reptar represents the untapped power within all of us to fight against the things that terrify us. If we all keep an imaginary dinosaur in our arsenal, maybe we will be able to summon up the strength to fight for what we believe in, just like Tommy Pickles and all the other Rugrats.