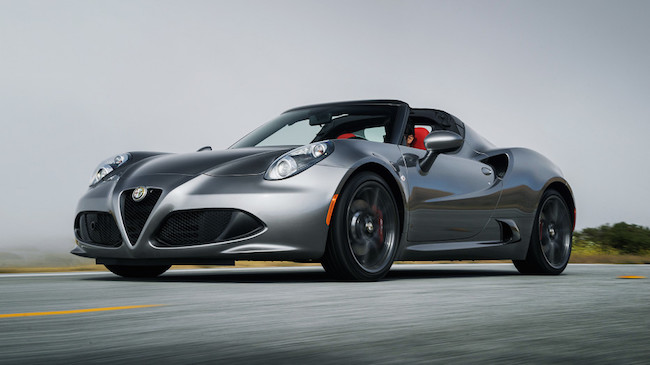 Americans are catching on to the brilliance behind Europe’s esteemed Alfa Romeo, and are beginning to get behind the praise directed specifically toward the Alfa Romeo 4C Spider, the latest coupe-turned-convertible by the brand. We often look at coupes turned convertible with an eye roll – couldn’t they have left well enough alone? – though the 4C Spider bucks that thought process with its completely versatile charm that applies to both the convertible and the coupe.

If you’re not into small cars, you likely won’t be into the Alfa Romeo 4C Spider. Having been compared to a Lotus Elise, the itty bitty 4C weighs in at just under 2500 pounds, making it one of the smallest performance convertibles on the road. The convertible’s curvy body maintains its sex appeal despite its transition from a coupe, which is a feat often lost in other brands.
The Spider features the windshield header’s carbon fiber components in a beautifully exposed manner, while it remains unfortunately hidden in the coupe. In addition, its ragtop is fairly significant, taking up a good portion of the cargo area. The framework is bulky and spans great lengths across the car. Mounting the top can be difficult, unless of course you opt for the carbon fiber hard-top, which is much prettier and significantly easier to maneuver.

The Spider works off of a six-speed dual clutch automatic in a 237 horsepower 1.7 liter turbocharged four-cylinder engine that’s actually mounted behind the passenger’s seat. Drivers find on the track that they can hit zero to 60 miles per hour in a mere 4.1 seconds, reaching top speeds around 160 miles per hour. It’s not the fastest little convertible on the road, but we can assure you in a car that small, it feels like it.

So it’s attractive and it’s quick… but is it practical? In terms of gas mileage, the Spider gets excellent reviews as it gets 24 miles per gallon in the city, with 34 miles per gallon on the highway. In terms of availability… good luck getting your hands on one. The United States should see about 1,000 of these cars in distribution this year, with increases being made year over year. Alfa Romeo actually hopes to have 8 products in the United States by 2018, but in the meantime they’ll be hard to get ahold of outside of Europe, unless you’re lucky. Lastly, expect to pay more than the coupe, which starts around $55,000, making it either relatively cheap or relatively expensive (depending on how you look at it).
Bottom line – most cars usually don’t fare well in the transition from coupe to convertible, but it appears as though the 4C Spider is the rare exception to that rule. Don’t miss out on this peppy, curvy masterpiece – it’s rare to find a convertible sequel that’s just as good (if not better) than the coupe that came first.