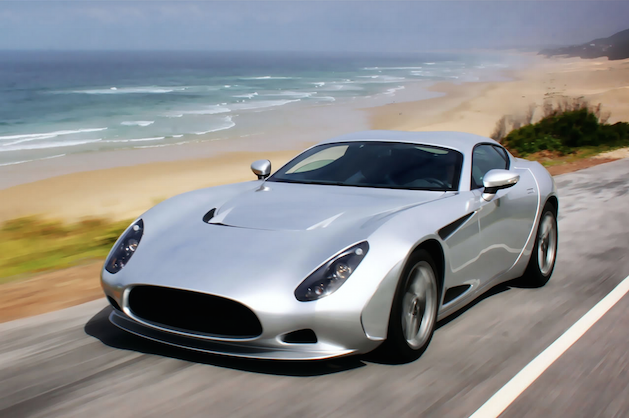 AC first joined forces with Zagato in 1957 when the latter designed the one off AC Ace Bristol Zagato sports car, a pure racing GT Berlinetta. It was designed with the characteristic Zagato roof, containing two bubbles for crash helmets, and a 2 litre, straight six engine. The AC 378 GT Zagato sports car was based on the Zagato Perana Z-One, launched in 2009 at the Geneva Motor Show.
In 2012, Superformance teamed up with AC, and the Perana was relaunched as the AC 378 GT Zagato, and priced at £90,000. It was powered by a 6.2 litre, V8 engine, sourced from the Chevrolet Corvette C6, with a six speed gearbox, and developed 434 bhp at 5900 rpm, and 430 ft/lbs of torque at 4600 rpm. This produced a top speed of 185 mph, a 0-60 mph time of 3.8 secs, and a 0-100 mph time of 8.9 secs.
It was offered as a fixed head coupe, with a roadster to follow. The cockpit’s layout was based on Zagatos minimalist design philosophy, and production began later in 2012. The space frame chassis incorporated steel tubes, and supported a lightweight fibreglass body, so that the final weight of the car was 1465 kg (3230 lbs).
Typical of AC, there were no electrical driver aids, such as ABS or traction control. The “378” part of the name reflected the cubic inch capacity of the engine (in line with the naming of other AC cars, such as AC 289, AC 427), whist the “GT” defined its role as a long distance tourer, and “Zagato” identified its renowned Italian designer. Its excellent handling characteristics were derived from its 50/50 front/rear weight distribution.
The latest AC licensee was the South African company Hi-Tech, which built glassfibre AC Cobra replicas for the US market under the name Superformance, and was now chosen to build the 378 Zagato. Furthermore, the company planned to build a V8 powered AC Cobra styled Mark 2 convertible, priced at under £70,000. The styling of the 378 GT was to be based on the original 1960’s racing AC Cobra coupes.
The AC 378 GT Zagato sports car received its UK launch at the 2012 Auto Italia Motor Show at the AC Heritage Centre at Brooklands, where older AC models continue to be built. This launch marked the 50th anniversary of the creation of the original AC Cobra back in 1962. The new car was to be built in South Africa and Germany. AC had a rollercoaster financial past, with receivership in 1996. However, new management has ensured that the iconic AC Cobra is brought back into production.
On the other hand, although the Mark 2 and Mark 4 “Continuation” Cobras were thriving, AC could not remain as a one model company. Hence, launched at the 2012 Geneva Motor Show, the AC 378 GT Zagato sports car represented the first all new model introduced by the company in over a decade. With the demise of the Perana, Zagato offered the design to AC, who agreed to develop the theme. The 378 Zagato had a new chassis and body built in South Africa by the team who built the Noble sports car.
Initially, the car was available only in the UK and Germany. Marketed in the US, it would have had a price tag of around $140,000, some three times more expensive than the Corvette C6 whose engine it used, which possibly explained its absence from the US at that time.
If you would care to view my Original article, containing Photographs, Videos, Technical Data, and Charts not shown in this Article, then please click the following link:
http://www.sportscar2.com/sports-car-ac-378-zagato.html
If you would like to view ALL MY REVIEWS, then please click the link:
http://www.sportscar2.com/new-articles.html
My website is: sportscar2.com/