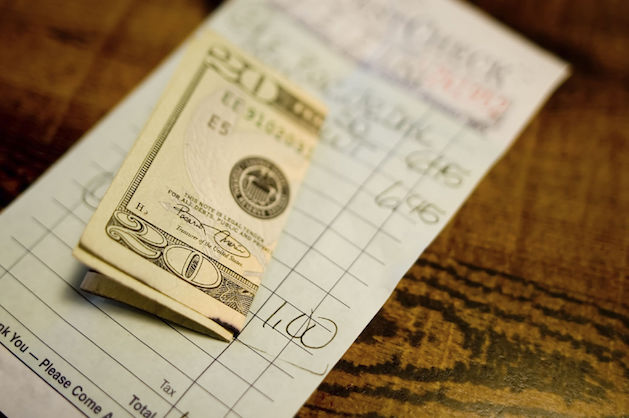 The Definitive Argument Against Tipping

It’s been a while since the news cycle has had a story about a young waiter or waitress getting a rude note instead of a tip from a customer. In many ways that’s good, because those situations rarely end well for anyone. Usually the server broke some sort of company policy about disclosing customer information then gets fired, and a potentially high profile citizen gets called out all across social media and embarrassed.
Tipping has been, and will continue to be, a pretty heated debate topic in the United States. It is part of the same discussion that happens when fast food workers strike for higher wages or a politician somewhere talks about living wages. Restaurant servers have willingly, though sometimes reluctantly, put themselves at the mercy of the generosity of strangers to make a living. At its root, the decision to be a waiter or waitress is a choice to accept a job where the guarantee of pay is anything but guaranteed.
That’s where the argument against tipping begins and dies.
Sorry, folks, there is no definitive argument against tipping. We’ll go so far as to say there is no legitimate argument against tipping at all — at least not restaurant workers or bartenders. Your barista is another matter. Your hair dresser? Well, it’s your hair. Risk not tipping her or him if you want.
In the United States we’re very fortunate that the majority of the population can afford to eat at restaurants. While it’s sometimes a struggle to make ends meet, the reality is that most people in this country can afford to eat dinner out of the house. That’s a luxury the vast majority of the world doesn’t have. This point needs to be driven home, because it is a luxury. It isn’t a right. It isn’t guaranteed. When you decide to eat out you know it’s going to cost more than cooking a meal yourself and eating at home.
American affluence has risen drastically since the end of World War II. Car ownership, home ownership and things like eating at restaurants or vacationing have become fairly standard practice for most of us, and they’re things most Americans take for granted. Aside from the past 70 years or so, something as simple as having a person bring food to you, or to serve you food, was a sign of wealth and affluence. If we go back further in history, it was only the extremely wealthy — think the top 1% of the top 1% — who could afford this.
In fact, the word server dates back to the late 14th century and is derived from, you guessed it, the words serve and servant. Prior to the 12th century, the word servant was often reserved specifically for slaves in most of the Latin-speaking world. Now, happily slavery is outlawed in the United States, which means it’s time we stop treating 21st century servers like 12th century servants.
Some of you, as others have before, will undoubtedly revert back to the argument that people are waiters and waitresses by choice, therefore tipping should be optional since these people knew what they were getting themselves into. Others have taken this argument and extended it further, saying that if only these waiters and waitresses had just gone to college they wouldn’t have to begrudgingly accept a job like serving. Right?
No. From 2000-2010, the number of waiters or waitresses with college degrees rose by 81% according to U.S. Census Bureau figures. In fact, over 30% of all college graduates are underemployed, and that number reaches almost 50% for recent college grads. Education isn’t a golden ticket to being solidly middle-class. A bachelor’s degree is a great place to start, but with things like automation and technological innovation happening every single day, jobs are being eliminated. In fact, one day soon my team and I could be replaced by robots too.
Okay, so servers need to get paid, but why can’t the restaurant just pay them more and not expect customers to tip? Well, they can and have. But until such a time comes that all restaurants have eliminated tipping and pay their employees a livable wage it’s up to diners to foot bill. This is where the discussion needs to shift back to eating out being a luxurious experience.

Eating at Applebee’s probably isn’t what you typically think of as luxurious, but it fits a loose definition of the word— it is self-indulgent. What is more self-indulgent than having someone come at your beck and call? You can hire a butler for that, but that would run you $50,000-$150,000 per year, depending on the quality of service you expect. That’s anywhere from $24-$72 per hour. To put that in perspective, if you wanted to pay a server like you’d pay a butler, you should expect to tip no less than $24 for an hour in a restaurant, even if your bill is only $30. Now, a 15%-20% tip probably sounds a whole lot better, doesn’t it?
Most servers would actually love to earn what a butler earns. According to the U.S Bureau of Labor Statistics, the mean income for wait staff in restaurants is only $10.04 per hour, which compares pretty favorably to fast food works at $7.17. This isn’t a lot of money.
We can understand not wanting to tip. We agree to pay the menu prices for items we order, but why should we be burdened with tipping the wait staff or bartender? Because it’s socially expected. Minimum wage laws take into account the fact that servers earn their money through tips, which is why most minimum wage laws — local, state, and federal — don’t apply to servers. For the most part they only earn, as a base pay, $2.00 per hour. They rely on tips to survive. You know this. We know this. And restaurant owners know this. Eating out is a luxury, and you need to expect to pay for more luxury-like experiences.
Further, most restaurants have something called tip-outs, where servers take some of their tip money and put it towards tipping the support staff like bartenders, food runners and sometimes kitchen staff. What this means is that when you don’t tip your servers it is actually costing them money. They’re literally paying someone else for the honor of serving you.
At this point we’re going to get  a little harsh, so if you’re easily offended and don’t want to face any criticism for your actions it’s probably time to leave.
If you don’t tip your waiter or waitress you’re a jerk. You’re a big jerk. You’re an inconsiderate and cold-hearted jerk. Believe it or not, a server’s job isn’t easy. The reality is that their shifts are spent entirely running around a restaurant, not sitting down, dealing with rude customers snapping their fingers, and every so often cleaning up things like vomit or spilled drinks. Even worse still, sometimes the kitchen totally messes up, and it’s the server who pays the price by having to be the bearer of bad news to hungry patrons, and it’s the server who gets a bad tip as a result. The reality is that serving is a high stress job. Highly skilled? Probably not, but that doesn’t change the fact that is is taxing.
When you decide to eat out you know the expectations about tipping. You know that server is dependent on the kindness of others to make ends meet, which is why not tipping is a really crappy thing to do. If you eat in a restaurant and someone is serving you then you need to tip. If you don’t want to then you don’t deserve to eat out. If you can’t afford to tip then you can’t afford to eat out. Sorry, but that’s just the truth.
For the first time in this country’s history, Americans are spending more on eating out than they are on buying groceries. We’re a society of luxury when it comes to food, and tipping needs to be a part of that. You know the rules and expectations, and not tipping is inexcusable. Start at 15% and go up from there, depending on how the service was.

Published in Life and Wably Money