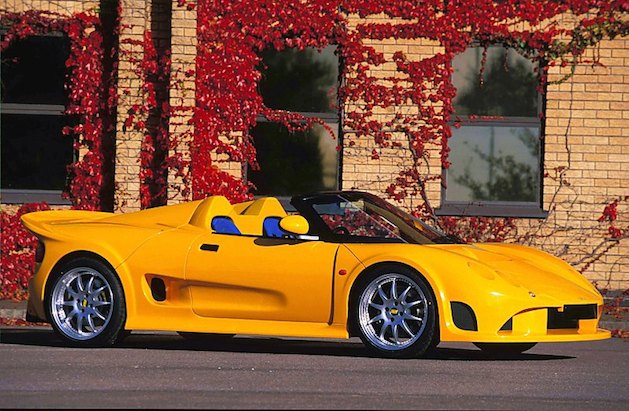 The M12 GTC sports car was one of three M12 variants introduced at the Birmingham Motor Show in 2002.
This groundbreaking model, priced at £45,000, was the first Noble sports to be offered in the form of a convertible, and was based on the M12 GTO-3. In terms of marketing, the GTC was positioned in the under £50,000 sector so that it would be seen as a viable alternative to the higher-priced Porsche 911 Carrrera Cabriolet and Morgan Aero 8, whilst Lotus Elise convertible owners would be attracted to the higher performance on offer.
The car’s roof section was reminiscent of the Porsche and Triumph TR Targa tops, and consisted of two detachable composite fibreglass panels which, when removed and stored behind the seats, left the rear section in place. However, to achieve the full benefit of open top driving, the rear section could also be removed, although there was nowhere on the car for it to be fully stored away.
The acknowledged high build quality of Noble sports cars meant that the GTC was as draught-free as its coupe counterpart.
Another unique feature was that the car’s rear section had been re-styled to create an area suitable for storing luggage, which could be accessed by way of the engine cover that could be raised hydraulically via a lever in the cabin.
A regular feature of many convertibles was that the chassis would require additional strengthening to allow for the increased stresses created by removing the roof section. However, this was not necessary with the GTC owing to the rigid steel space frame chassis used in conjunction with the coupe variant. Large 33cm AP Racing vented and drilled disc brakes all round were retained, as was power assisted steering. The spacious cabin had leather trim as well as adjustable steering column and seats, the latter being fitted with anti-roll hoops. It had a composite fibreglass body, 18 inch alloy wheels, and a kerb weight of 1080 kg.

The M12 GTC was powered by the same 3 litre, V6 engine as used in the M12 GTO-3 variant. However, the only difference was that only one turbocharger was used, with a maximum boost of 0.6 bar, unlike the two fitted to the GTO-3. Furthermore, as a result of the modifications to the car’s rear section, the intercooler was now re-positioned. This arrangement developed 290 bhp at 6000 rpm, and 290 ft/lbs of torque at 4750 rpm, the greater majority of which was available around 3000 rpm. Linked to a six speed manual gearbox, it produced a top speed of 160 mph, with a 0-60 mph time of 4.5 secs, both of which were slightly slower than the GTO-3. Technical Data:

To view my ORIGINAL more detailed article, containing Photographs, Videos, Technical Data, and Charts not shown above, then please click the following link:
http://www.sportscar2.com/sports-car-noble-m12-gtc.html
I Highly Recommend you click this link since by doing so you will get the full benefit of the Original Article rather than just the overview above since images, charts and competitive analysis have had to be removed.
If you would like to view ALL MY REVIEWS, then please click the link:
http://www.sportscar2.com/new-articles.html
My website is: sportscar2.com

Published in Classifieds, Hi-Performance and Import