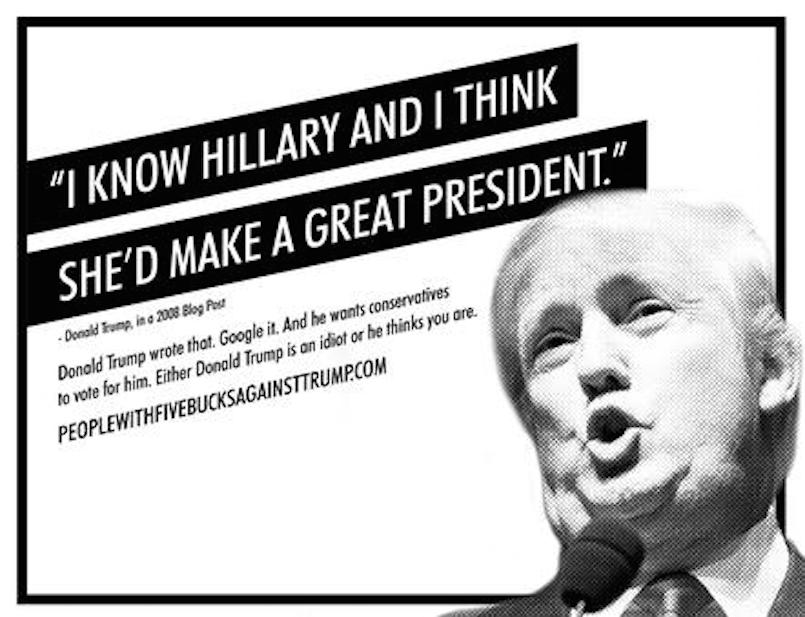 This Guy Is Raising Money To Run An Anti-Trump Ad

So Donald Trump is still leading in the Republican Primary polls. I mean this thing started as a joke, right? Now it looks like a serious Donald Trump presidential candidacy is a horrifyingly real possibility. Part of the problem is that nothing he says seems to affect his appeal among the far right elements of his base. In fact, it seems like Trump is popular because he says those things. It’s what the people who support him are actually thinking, and it makes him look like an outsider to the political establishment. So what can be done to stop Trump from sweeping the New Hampshire primary? Well Louis Wittig has an idea. An ad copywriter from the state, he has launched a Gofundme campaign to run ads critical of Trump in local newspapers right before the voting. His anti-Trump ads will focus on Trump’s numerous democratic overtures prior to this election:

“Of course he is a bigot. And so much more. But our thought process is this: The people who might vote for Trump already know about his nasty statements, and that’s kind of why they like him: He says things no one else will say, so he must not be a regular, wishy-washy Republican. So calling him a bigot only plays to his strength as an outsider. But what will get a conservative voter to think twice is the fact that Trump is aaaanything but conservative: He really likes Democrats, Hillary Clinton and government handouts. So the ads go after that.” -Louis Wittig

The idea is to alienate him from the super conservative republicans who tend to be the base of his support. Trump supporters may love his plan to deport Muslims, but they might not like the fact that he’s donated half a million dollars to democratic candidates over the years. So if you’ve got five dollars, and aren’t a fan of carrot-colored racists, you can check out their cause here.