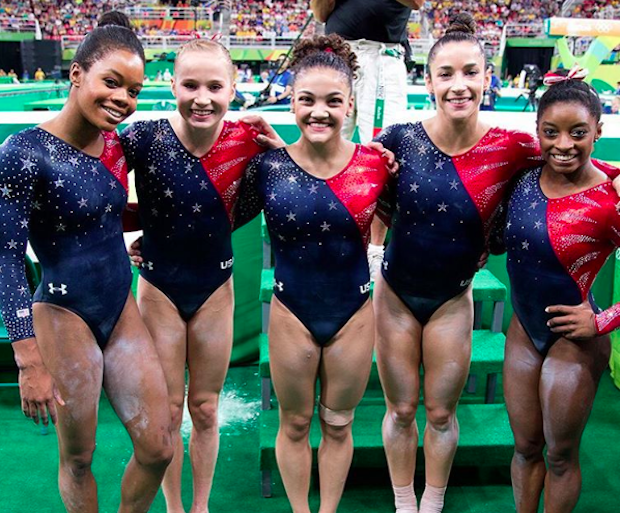 If the women’s gymnastics qualification last night is any indication, the U.S. team is coming home with armloads of medals. Their team scored an unheard of 10 points more than the second highest scoring team, China, which is nearly as much as tacking on an entire routine’s worth of points.

It’s no surprise that the U.S. team is dominating with team member Simone Biles favored to win five out of six gold medals. Biles has been called both the best in the world and the best that’s ever lived. She even has a tumbling move named after her that no other woman does; the “Biles” is a double layout half twist with a blind landing.

The depth of talent on the U.S. team is something to celebrate, but it also created some nail biting tension even within the qualification rounds. Countries have a two-person limit for the individual all-around, meaning that the two returning Olympians, Gabby Douglas and Aly Raisman, competed for the remaining slot. (Biles was essentially a shoo in.)

To give you an idea of how amazing this team is, Gabby Douglas scored third out of all the competitors there by a wide margin of 1.399 points above the fourth place finisher. But being third best in the world wasn’t good enough. Aly Raisman beat her out by half a point, after out performing Douglas on the floor exercise and tying with her on the beam at the end of the night.
Douglas will still be competing on the uneven bars, along with teammate Madison Kocian. They placed third and first respectively in the qualification rounds.

Outside of the U.S. women’s team, someone else to keep an eye on is Oksana Chusovitina representing Uzbekistan. She’s competing in her seventh Olympic games at age 41 against gymnasts her son’s age. Chusovitina won the silver medal for the vault in the 2008 Beijing Olympics, and remains well in the running having finished fifth in the qualification rounds. See her vault here.